Being that I never lived in India and grew up in the United States most of my life, I hated visiting India.  Part of this was due to the cultural difference between my relatives in India and I, and a huge culture shock from the moment I would land in India.  And the other half was I strongly disliked the living situation in India, in particular, the bathroom not being up to par with what I was/am accustomed to.  After having done a total of 7 trips to India in the last 30+ years, this is the “first” time I truly enjoyed my visit.  I’m not quite sure if this is due to the fact that India has become more western with malls taking over every major city and the widespread influence of the American culture, or was it more to do with the fact that I went there with an open-mind and wanted to explore New Delhi as a tourist, not a visitor. 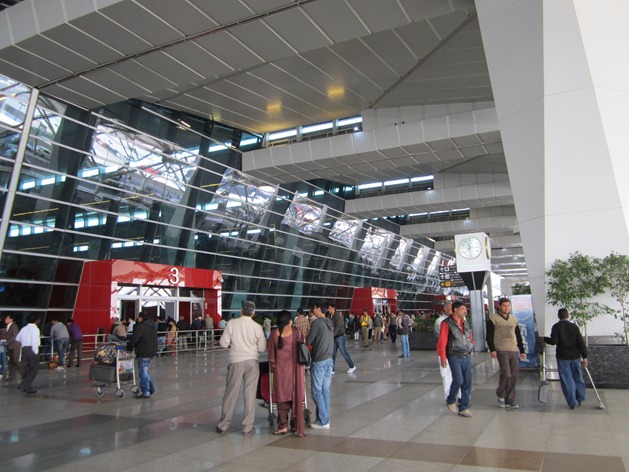 As I flew back home, I sat back and wondered what was so different about this past trip?  For the first time in my life, why was I sad leaving a country I had repelled for so long?
For one, I give my 20 year old niece (cousin’s daughter), Umang, a whole lot of credit for knowing exactly where to hangout in New Delhi – it truly helps hanging out with a local whose company you actually enjoy.  Given that Umang is quite western in a lot of ways and represents an entirely new generation in India who are commonly referred to as RNI (Resident Non-Indian), it was much easier to connect with her than say other relatives of mine.  Umang took me to hidden gems, some wonderful cafes & restaurants in New Dehli that I would never have experienced had I not hung out with her.
Second, my husband who knows a thing or two about New Delhi arranged for a driver which made getting around a whole lot easier.  It was also great he had lots of time to spend with me since New Delhi isn’t exactly safe for women during the evening hours.
Third, I believe due to the western culture boom in India, India isn’t as foreign to me as it once was.  Aren’t we all drawn to cultures we are able to connect with at some level?  The malls are brand new and immaculate, and quite honestly one wouldn’t know the difference between the United States and India if you were just hanging out at a mall, in fact the malls in Delhi appeared to be a lot nicer than those in the USA.
And lastly, the biggest difference was I had a plan each day so no time went wasted, I went to India with an open-mind and as a tourist.  Sitting at home and roaming the crowded streets of Karol Bagh were a thing of the past, although I couldn’t help but visit the infamous Karol Bagh at least once, it’s tradition now.  Overall, the trip felt more like a vacation and was perfectly balanced with all things I loved to do – hanging out with family, eating, shopping, and sightseeing. 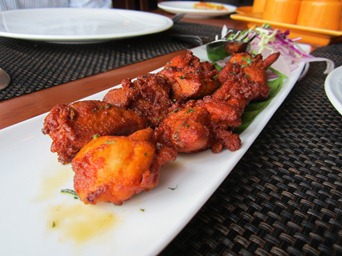 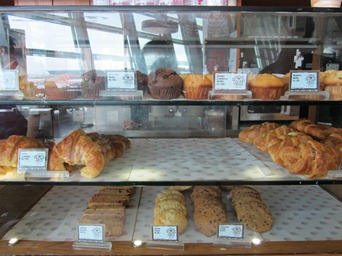 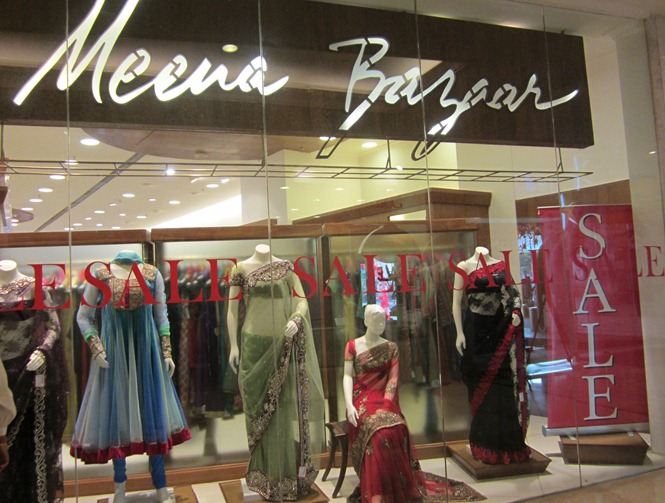 So has India changed?  In many ways, yes.  For one, I saw a huge difference in Delhi’s International Airport.  My first thought was, holy crap, are we in India?  Dehli’s airport is far better than New York’s JFK and London’s Heathrow, and all I could think was – it’s about freakin’ time!  I was truly pleased to see that. 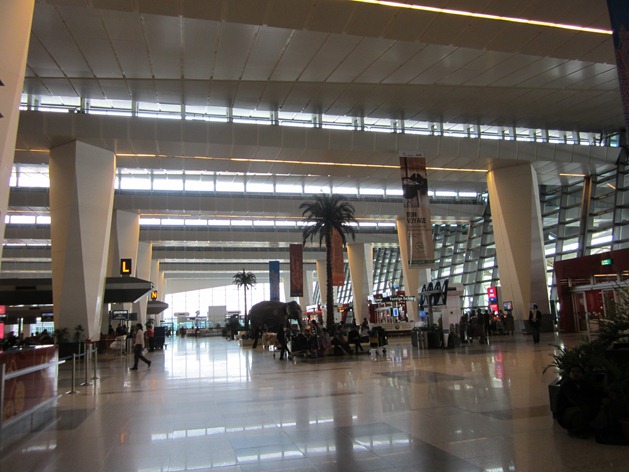 On my last visit 2 years ago, Delhi’s airport was still in the process of being renovated with absolutely no brands in sight, and now every brand from Lancome to Mango to Chanel to Versace had landed at Delhi’s International airport.  The country as a whole is going through a major transformation as people have “new money” and aren’t shying away from spending it.  Dehli’s airport is beautifully designed with immaculate floors, palm trees here and there, and lots of cafes.  I was actually annoyed we arrived late during departure because I could have totally spent my leftover rupees in “duty free” shopping, but I’m sure my husband was relieved. 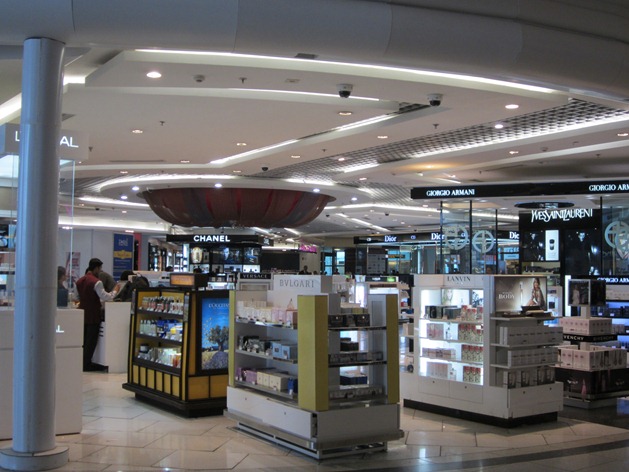 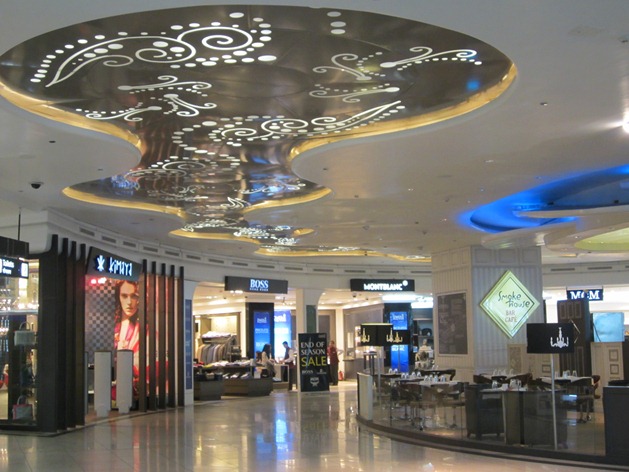 India is no longer as reasonable as it once was. Since I was receiving 50 Rupees on my 1 USD, I didn’t find the fast foods, such as, McDonalds, Café Coffee Day, Dominos Pizza to be expensive, but I did notice a huge rise in inflation.  Just two years ago, a cappuccino at Café Coffee Day that was priced at 50 Rupees ($1) was now priced at 84 Rupees ($1.68).  From a local’s perspective, that is a major rise in inflation in merely 2 years.  What I did find expensive, however, was dining out in New Delhi.  A slice of cake ranged anywhere from 150 Rupees ($3) to 250 Rupees ($5) just as you would expect in the United States, and the portions were much smaller than here in the United States. 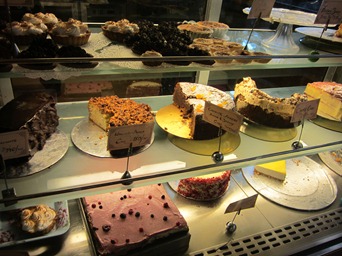 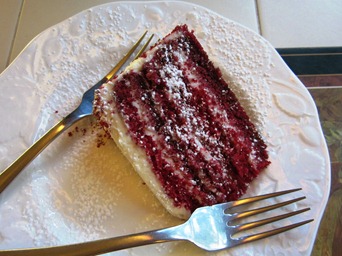 Since alcohol is still controlled in New Delhi, a martini will run you about 450 Rupees ($9). Appetizers ranged anywhere from 300 Rupees ($6) to 950 Rupees ($19), again, this is pretty much what you would expect from a restaurant in the United States.  And what shocked me most was the tax on food when dining out.  Most places added a service charge anywhere from 10% to 20%, there was generally a Service Tax of 3%, and also DVAT Tax of 12.5% and 20% on the same bill.  On one occasion we paid up to 42.5% in tax alone!  The cost of dining out in New Delhi is really no different than dining out in New York City, although the cost of drinks is cheaper in New Delhi, but the taxes are much, much higher.  With such a rise in inflation and taxes, I can’t possibly understand how middle-class Indians will be able to afford this lifestyle?  The rich just seem to be getting richer, whereas the poor just seem to be getting poorer and at some point this lack of equality will not sustain. 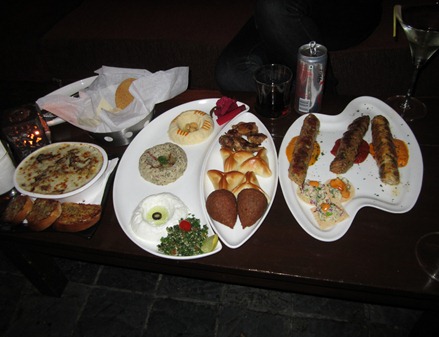 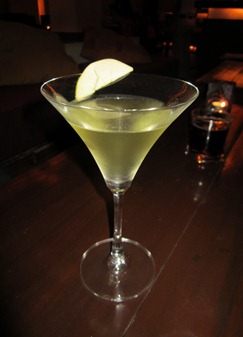 Unlike the western world, in India it is quite apparent who has money and who does not simply by the way a person looks. While shopping at the malls in India, it was noticeable that only folks in the middle-upper and upper class society shopped there.  Aunties hanging out with other aunties at a café with their Louis Vuitton satchels was quite the norm at New Delhi’s Vasant Kunj DLF Emporio mall.  But with the same token, the malls were not really crowded on a weekend afternoon, whereas the markets of Karol Bagh and Lajpat Nagar were crowded regardless of the day.  There still appears to be a huge segregation amongst the people in terms of wealth. 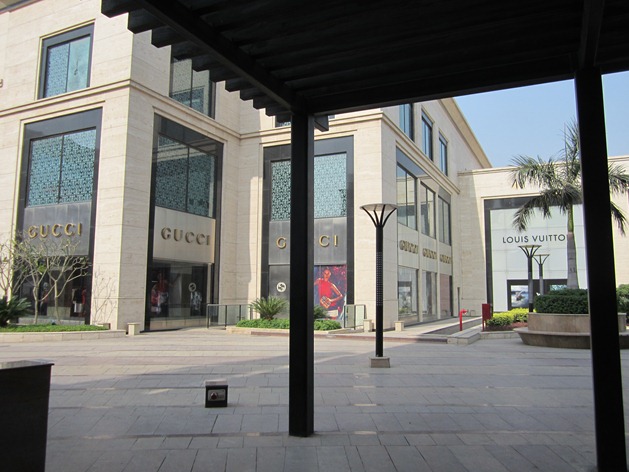 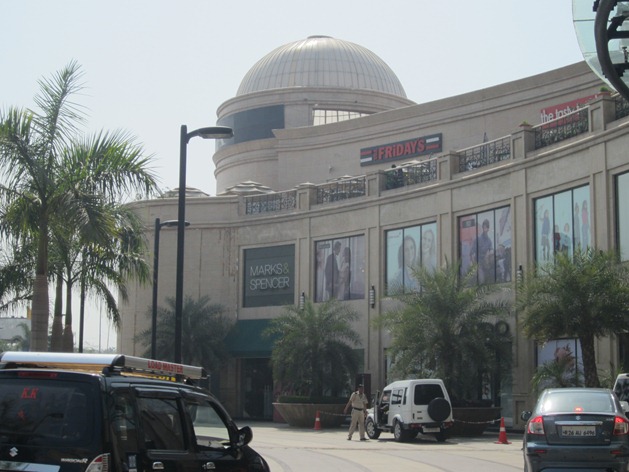 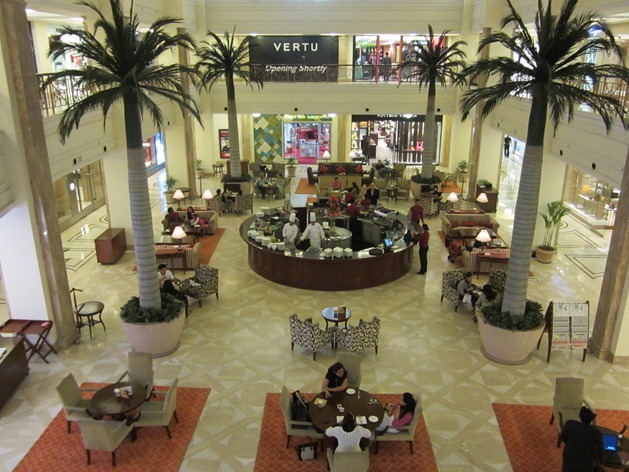 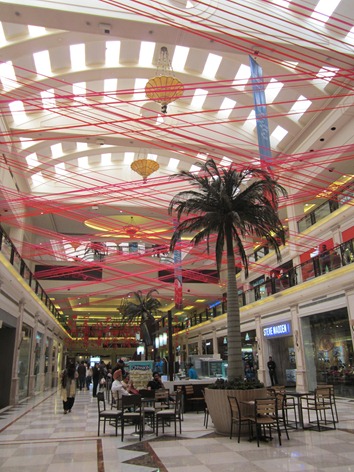 And now the negatives, I’m sure you saw this coming.  In terms of traffic, noise, and overall “outdoor” cleanliness, although there is some improvement, India is still quite behind in my opinion.  There is still a major disparity between the indoor and outdoor lifestyle, meaning you can live a quality life indoors if you’re willing to spend the money for it, but you can’t have the same quality of life outdoors given the level of pollution, stressful driving, and lack of cleanliness.  Getting from point A to point B can be rather maddening given the amount of traffic and the constant beeping sound of the auto rickshaws that surround you. 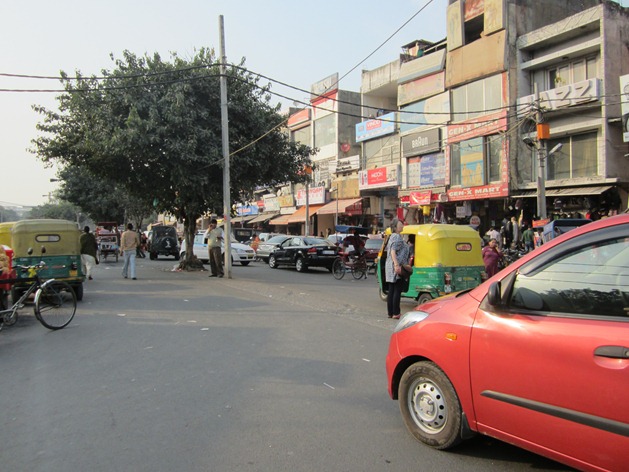 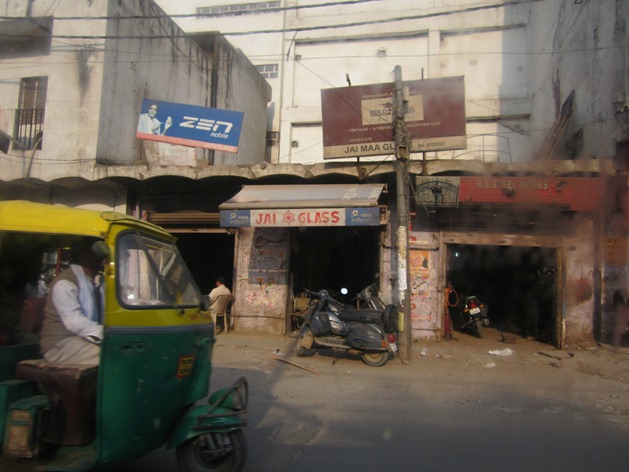 In terms of safety for women, I’m not sure if there has been advancement, especially in New Delhi where women are typically accompanied by at least 1 male or more.  Unlike Mumbai and Bangalore which are always a step ahead of New Delhi, New Delhi still remains unsafe for women at night.  For a woman, taking a cab alone in the evening is not recommended here.  Compare this to the United States and you will find that most women are independent and don’t need to be accompanied by a male in major cities.  India still seems to be a highly male driven society where you see hoards of men, everywhere, who love to “stare,” even if you aren’t dressed provocatively.  I mentioned this to my niece, Umang, and she said to stare back and give them attitude, but I didn’t listen to her and just looked away. She’s just 20, street smart, and knows how to handle herself, I on the other hand still remain naive when in India. 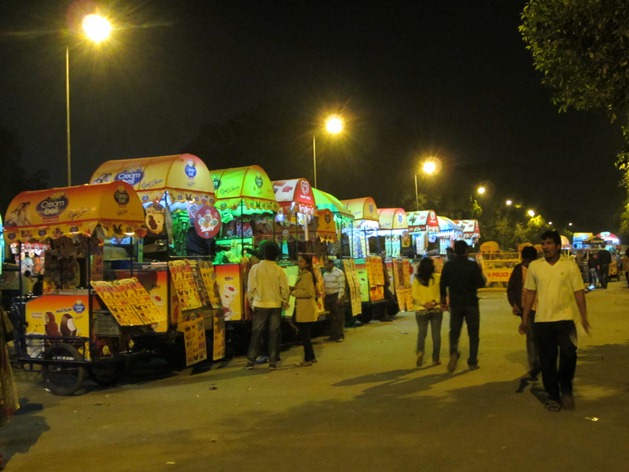 From Chandini Chowk to Christian Louboutin, India is a land full of extremes and still so different from the western world I live in, but it is one that I have come to appreciate over a long period of time.  So which country is better, an uncle asked me during my stay – India or USA?  My response was they are both great in their own way, what can so easily be attained in India (fulltime driver, fulltime cook, fulltime help) can’t be attained in the USA unless you are, for a lack of a better word, loaded.  What we so often take for granted here in the United States (constant supply of hot water, almost perfect roads, overall cleanliness) is barely visible to me in India.  The way I see it, it’s about making a choice about what you want and what you can live with, a life of luxury where basic everyday needs are problematic, or a life of quality where getting help isn’t exactly affordable.  The former is based on a more co-dependent society, whereas the latter is based on a more individualistic, independent society. 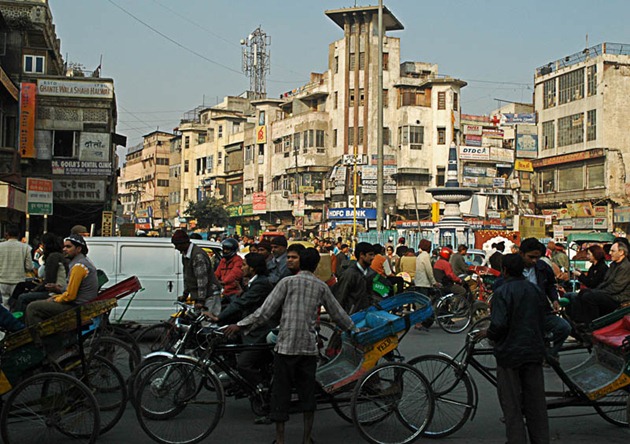 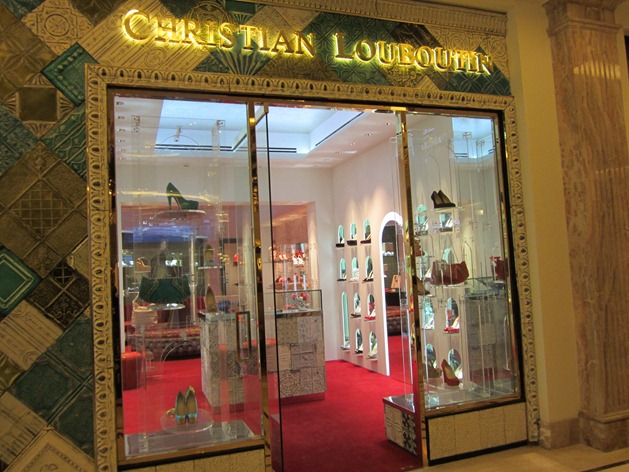 So is this love for India?  No, not yet at least, but strangely enough, I felt a slight sense of belonging during my recent visit even though I never lived there. I can’t comprehend “that feeling” either.  India did and always will continue to mystify me for as long as I shall live.  My “perfect world” would entail having the luxuries of India at a reasonable cost in combination with a high quality of life in the US and all its amenities.  Does that exist anywhere?  I do not know.  But I do know for once in my life leaving India felt bittersweet, bitter in the sense that I will miss my family, the laid-back lifestyle, and being treated like a “memsaab” everywhere I went, and sweet because I was sorta looking forward to coming home, my upset stomach fixing itself, and just taking a nice long hot shower with the perfect amount of water pressure.  Shallow?  Yes, perhaps! 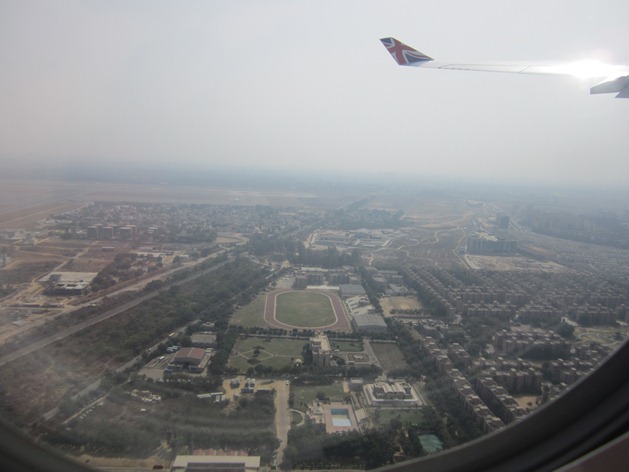 TELL ME: Are you an NRI?  What are your thoughts on India?   And for those of you who moved back to India, what are some of the struggles you faced in India?  Thoughts?  I’d love to hear!