Admittedly, visiting London for the food was the highlight of my trip, but unsurprisingly food tends to be the highlight of all my trips.  When one thinks of the food scene in London, greasy fish & chips, a fancy afternoon tea, a traditional English breakfast are some of the few items that immediately come to mind.  However, in addition to the British norm, Indian food is quite the craze in London, specifically speaking, Britain's national dish also known as Chicken Tikka Masala.  It may come to you as a surprise that some of the best Indian food in the world can be found in London.  After spending a week in London, I truly ate my heart out and enjoyed everything from greasy food to fancy afternoon tea, and I especially loved the cozy little cafes.  There is something for everyone in this highly diverse city.

To share with you are some of the most memorable dining spots in the charming city of London. 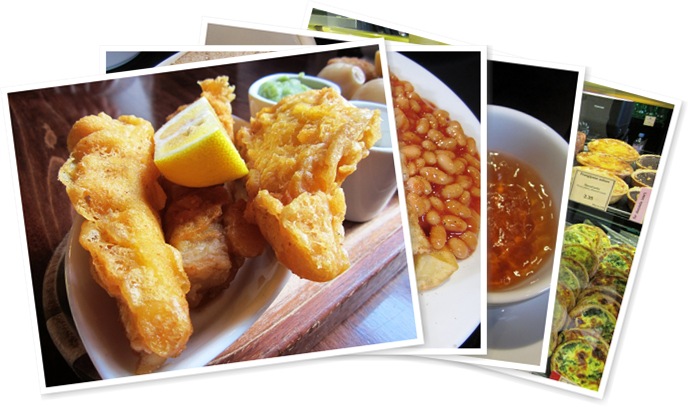 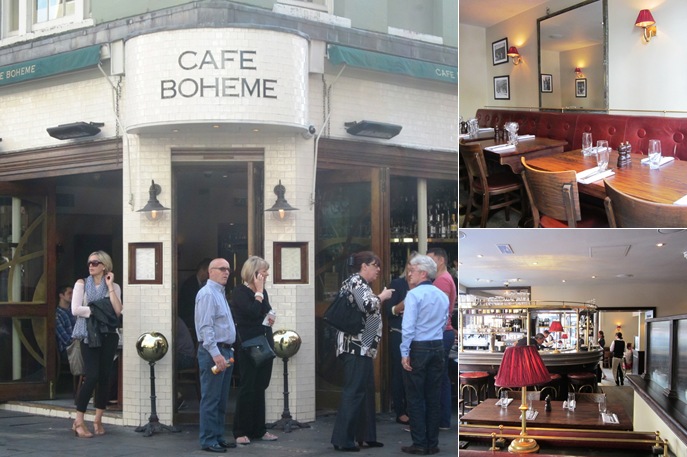 Complimentary bread and butter with a cup of English Tea which was not as full-bodied as I would have liked.  With that said, I loved the way tea was always served in a teapot at every single place in London.

For brunch, I enjoyed the Eggs Florentine which were quite tasty, however the hollandaise sauce was slightly lacking in flavor.  My husband went for the Scrambled Eggs on Toast which you can’t really go wrong with.

2. Dishoom (dinner)
Dishoom has two meanings… “the old Bollywood sound effect produced when a hero lands a good punch, or when a bullet flies through the air.”  Loved the name of this fabulous Indian restaurant.  I'm still dreaming about the Dhaba Chicken.

My friend, Manish, ordered a traditional Salted Lassi made with yogurt, salt, and cumin.  Absolutely Delicious!  As a starter, we split the Paneer Tikka, an Indian cheese marinated in tandoori paste with red and green peppers accompanied with 3 types of chutney.  Tasty, but heavy too, after all it is cheese.

For our entrees, between the 2 of us we split the...
Dhaba Chicken Curry (left image) which was OUTSTANDING and one of the BEST Indian chicken curries I have had to date.  The gravy was thick, dark, and rich without a ton of oil.
Vegetable Biryani (top right) was quite good made with green beans, sweet peas, and carrots, but nothing out of the ordinary.  Plain rice would have sufficed just as well.
House Black Dal (middle right) also known as Dal Makhni is a signature dish at Dishoom.  Lentils simmered over 24 hours are extremely flavorful and delicious.  A must order!
Roomali Roti (bottom right) is a thin roti, or Indian bread, stretched and grilled on a tawa or hot grill.  Light and airy Roomali Roti is a great accompaniment for the heavier dishes. 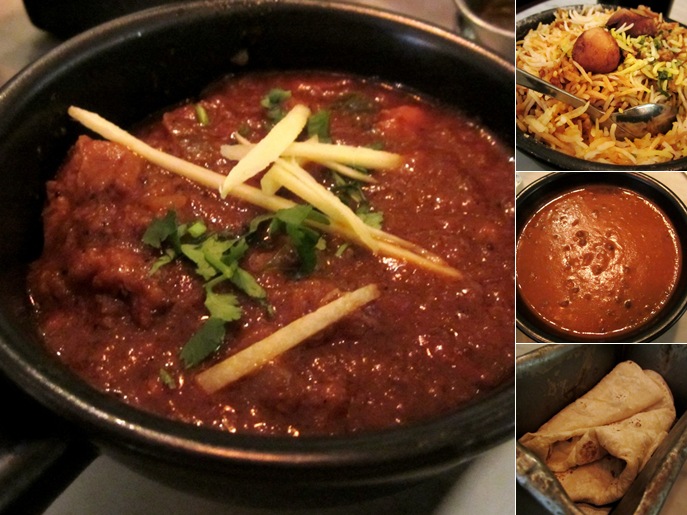 I ended my meal with House Chai, or rather Masala Chai flavored with ginger, cardamom, and other aromatic spices.  Of course, I need dessert with a cup of chai and I opted for the Pineapple and Black Pepper Crumble.  I’m not quite sure what exactly was “Indian” about this particular dessert made with a crumble of oats, sunflower seeds, almonds, coconut, honey and then topped off with cinnamon ice-cream.  Unfortunately, this dessert failed to tantalize my taste buds. 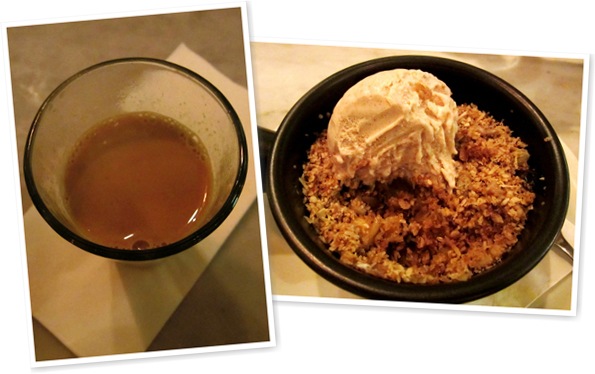 LOCATION: 12 Upper St. Martin’s Lane (Covent Garden)
COST: ££
CUISINE: Indian
VERDICT: 4.5 / 5
A Bombay cafe in London, Dishoom is now one of my new favorite Indian restaurants.  The portions here are smaller, and thus I suggest sharing 3 entrees between 2 people.  Clearly, my friend and I were famished as we ordered appetizers and dessert in addition to our meal.  The food at Dishoom is well prepared, extremely flavorful, and not overly oily as witnessed at many other Indian establishments.  Based on another recommendation by my friend, the Gunpowder Potatoes here are supposedly outstanding.  In addition to a few western desserts on the menu, I believe Dishoom needs to add some classic Indian desserts to their menu, specifically speaking, Ras Malai, Gajar Ka Halwa, and Gulab Jamun, kulfis aside.  Overall, excellent food and service.  I seriously can’t wait to go back to London just for Dishoom, not literally of course.  🙂

3. L’Ulivo (dinner)
an Italian restaurant near the Embankment area, much better than I expected.  Penne All'Arrabiata is the rage.

We started off with a Cabernet, one of my favorite red wines. 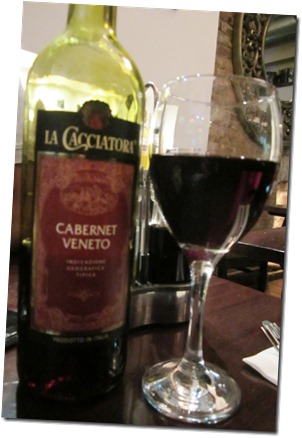 Penne All’Arrabiata (left) – my husband’s dish and one of the best All’Arrabiata dishes I have had, this version is easily comparable to the ones I've enjoyed in Italy.  Spicy and delicious.
Cannelloni Fiorentina (center) – my dish was slightly disappointing.  I ordered something heavy since I was cold and hungry.  Too cheesy which took away from the sauce.  It was good, but not good enough.
Salmon Agli Asparagi (right) – my friend ordered the grilled salmon with asparagus in a ginger sauce.  I wasn’t sure how the salmon would pair in a ginger sauce, as opposed to a garlic sauce, but I was pleasantly surprised.

We ended our meal with 2 desserts.  Berry Cake and Lemon Cake – both cakes were light and tasty, however my preference was the Lemon Cake.  Nothing too exceptional though.

LOCATION: 23 Villiers Street (Embankment)
COST: ££
CUISINE: Italian
VERDICT: 3.5 / 5
Based on first impressions alone, I assumed L’Ulivo appeared to be a tourist trap given its location near the Embankment area.  Quite honestly, the only reason we dined here is because nothing else in the vicinity looked all that appealing, and so we settled on L’Ulivo.  Having said that, the food here was better than expected and easily above average.  Good food and service, however the exceptional Penne All’Arrabiata is reason enough to dine here.

Started off with orange juice, a cappuccino, and of course, a cup of hot tea for myself.  Again, loved the presentation of the teapot.

Based on my recommendation, my husband went for the Eggs Florentine which was simply amazing… one of the best I've ever had.  The hollandaise sauce was so creamy and buttery.  Just perfection.
My friend went for the Smoked Salmon with Eggs which he loved.  I’m not a fan of smoked salmon though so can't really comment.
I opted for the Full English Breakfast minus the meat, however I was quite surprised with the size of this meal, hello this is Europe, not America!  The food was quite yummy.

LOCATION: 60 Old Compton Street (Soho)
COST: ££
CUISINE: Breakfast & Brunch, Cafes
VERDICT: 4 / 5
Balans Café was my very first meal in London.  I knew I wanted a traditional English Breakfast and it was quite good, though the Eggs Florentine blew my mind, I still can’t get over how exceptional they were.  Cute little café in Soho that also serves up American breakfast, pancakes anyone?

We started off with drinks and appetizers.  A Mojito and Cosmo Maghreb, aka Cosmopolitan.  Both drinks were yummy!  We also ordered a Mix Mezze vegetarian platter to be shared between 3 people… my favorites were the hummus, zaalouk, and haloumi cheese, however I found the falafel to be quite dry.

We also shared 2 entrees between the 3 of us… the portions are quite large here.
Chicken Tagine with chickpeas, cumin, and harissa sauce (left).  Pretty good, the chicken was very tender.
Mixed Fish Tagine with Tomato & Herbs (right).  This dish consisted of 4 different types of fish… cod, red mullet, king prawns, and calamari.  I preferred the flavor of this dish over the chicken.

And of course, no Middle-Eastern outing is complete without a Belly dancing show.  They are always so much fun and inviting. 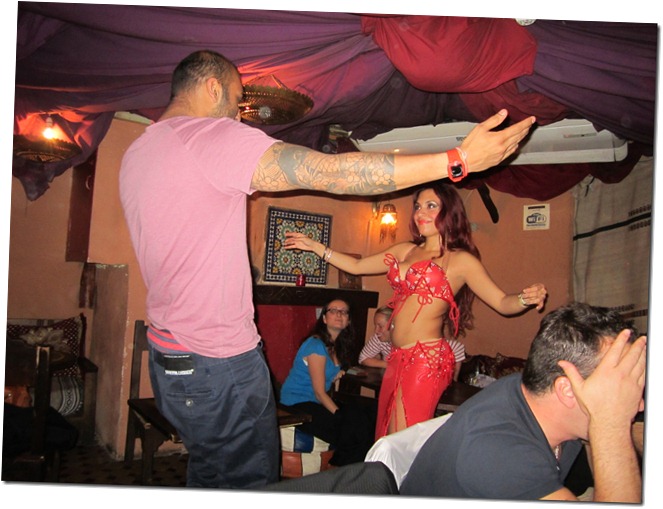 LOCATION: 1a Short’s Gardens (Covent Garden)
COST: £££
CUISINE: Moroccan
VERDICT: 3.5 / 5
Honestly, I was really looking forward to hookah at this Moroccan establishment, however in London if you wanna smoke hookah, you need to be seated outside.  It was a bit chilly to sit outside and since I adored the cozy ambiance inside, I quickly dropped the idea of dining outside.  Oh well.  In terms of food, this restaurant is above average, however I felt most items were slightly underwhelming.  Nonetheless, the ambiance and entertainment at this lovely Moroccan restaurant more than made up for it.  Definitely worth a visit if you are ever in London.

6. Caffe In (brunch)
My last meal in London all by myself.  Simple and comforting.

I ordered a Cappuccino and Poached Eggs with Toast & Tomatoes.  Sometimes it’s hard to believe something so simple could taste so good, even a grilled tomato.

LOCATION: 3 Shepherd Street (Mayfair)
COST: £
CUISINE: Café, Bakery, Breakfast & Brunch
VERDICT: 4 / 5
I loved the ambiance at this quaint little café nestled in Mayfair’s Shepherd Market.  Lots of similar cafes in the area that serve a simple breakfast with a variety of coffees and desserts.  Due to a 7.5 hour return flight back to the US, I had to unfortunately skip dessert to avoid any stomach issues.  🙁

TELL ME: What are some of your favorite restaurants/cafes in London?