Hola, Bonjour, & Bonjourno!  My husband and I are back from an adventurous vacation - 2 Weeks in Spain, France, and Italy - along the Mediterranean Sea.  I wanted to share my experience with you on the 3 countries visited and I hope you will take away some useful information before your next European vacation. 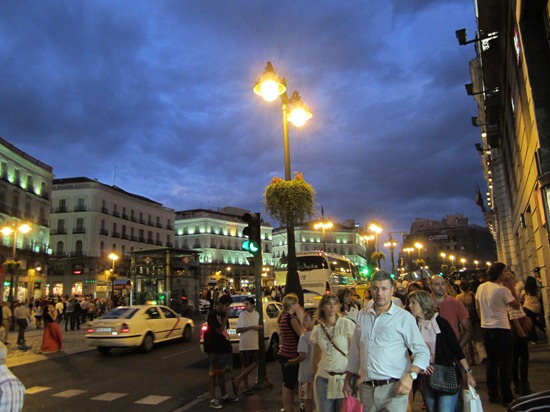 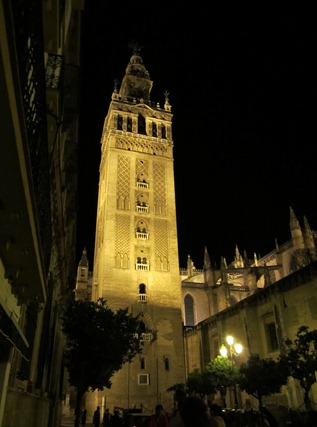 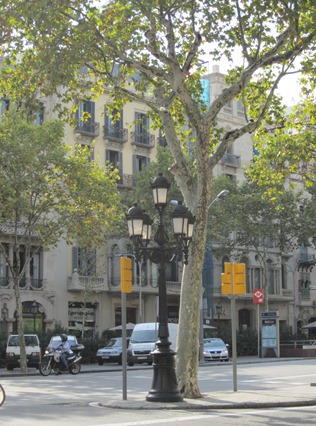 Spain is beautiful and culturally very rich.  The Spanish people are extremely warm and very welcoming towards tourists.  Although I suggest you should know a few basic words in Spanish so you can communicate with the locals, the Spaniards are more than willing to speak in English.  When traveling by train/bus, messages are translated from Spanish to English which was a great help to us. 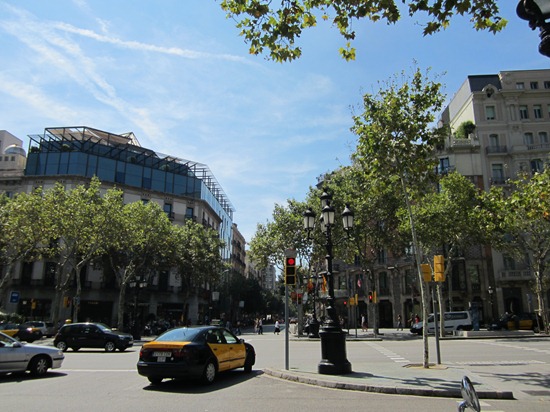 In terms of food, I can't say I was super impressed by Spain.  There is a lot of red meat consumption (ham) which makes it difficult for people, such as myself, who eat chicken and very little seafood.  In addition, it is difficult finding vegetarian options, however we managed. 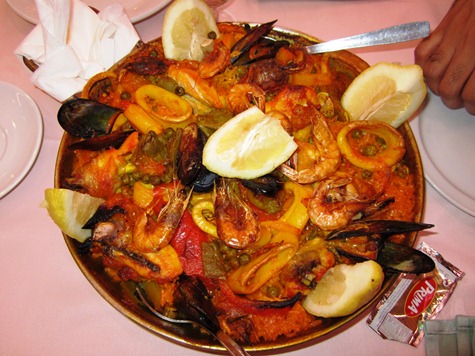 In Spain, tapas or small plates are very common.  You will tend to see people sharing tapas sitting outside a restaurant and people watching.  Each tapa can be shared between 2 to 3 people which is a great way to experience new dishes.  The cost of a tapa in most places is about 3 to 5 euros each. 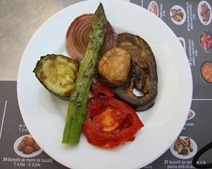 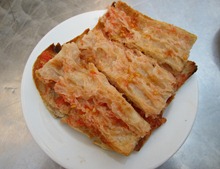 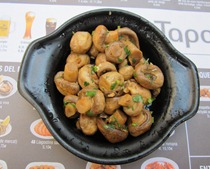 On the other hand, the desserts, the coffee, and breakfast in Spain was awesome and more than compensated for the lack of vegetarian options.  We started each morning with a hot cup of Cafe con Leche (coffee with milk) and some kind of baked good, usually an ensaimada which is a baked bread topped off with powdered sugar.  I also enjoyed a Spanish cake called a magdalena which is very similar to a Lemon Muffin. 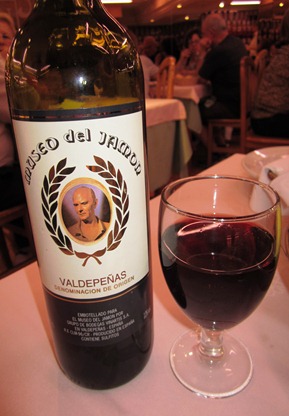 When it comes to wine I am a sort of a novice and if you are anything like me, I suggest going for a house wine, or copa (in Spanish).  Copa is so good and it comes at an affordable 1 to 2 Euro(s) a glass.  You can even order the entire bottle for less than 10 Euros which will get you about 5 glasses of wine.  However, if you really want a true taste of Spain, go for the Sangria which a blend of red wine and chopped fresh fruits, usually apples and oranges.

Out of all the cities visited, I have to say Barcelona was easily my favorite due to its amazing architecture, widespread streets, and gorgeous weather.  If you do plan to visit Spain, here is a recommended itinerary:
Madrid - 2 nights or more
Seville - 1 to 2 nights, more for daytrips
Barcelona - at least 3 nights 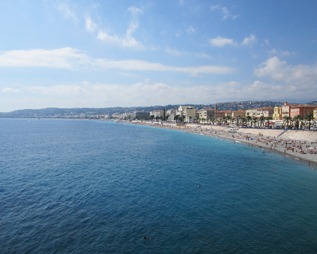 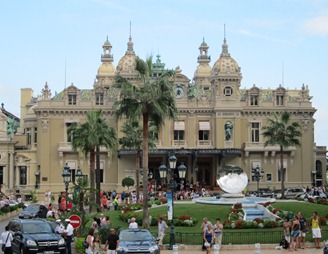 The south of France is blessed with breathtaking beauty, and if you have the chance to visit the French Riviera in your lifetime, DO NOT PASS UP THE OPPORTUNITY!  It is the perfect location for couples, friends, and family!  Seriously, there is something for everyone. 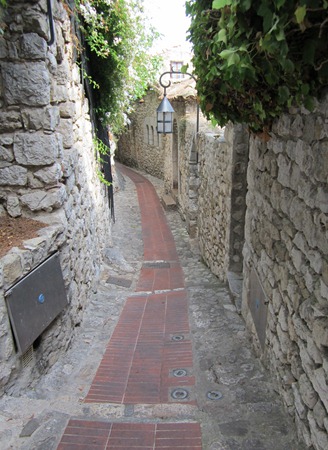 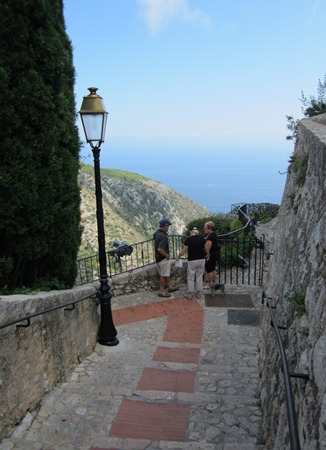 In my experience, the French Riviera is a lot friendlier towards tourists than Paris.  As mentioned above, learn to say a few words in the local language of the the country you are visiting so you aren't completely lost, at the very least the basics on how to greet someone.  Most trains/buses do not translate from French to English which was one of the issues we had to contend with on our trip, however most people who understand French were happy to help. 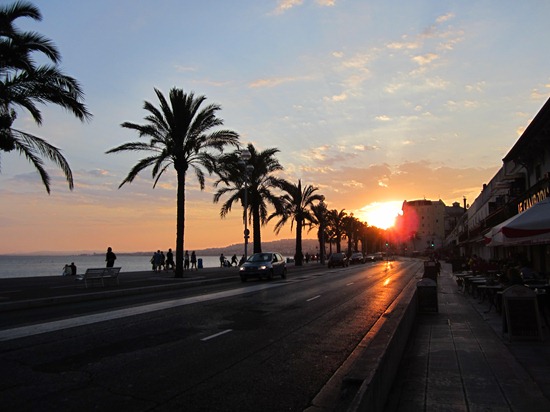 If you decide to vacation in the south of France, I highly recommend making Nice your base and visiting the towns nearby.  Like I, most people debate staying between Nice and Cannes.  Based on my research, Cannes is a LOT more expensive than Nice and lacks the same character and charm as Nice.  After visiting the region, it is now more apparent to me Nice was the right choice and I’m happy we stayed there.  Nice is also very well connected and is centrally located on the Riviera in comparison to Cannes. 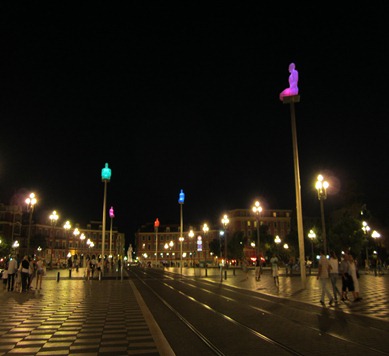 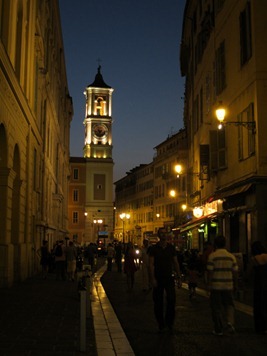 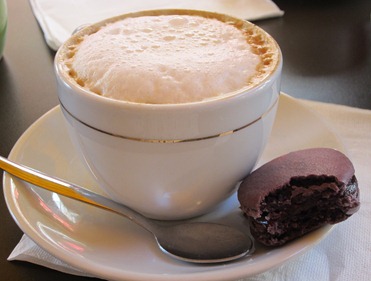 Food is not at all an issue on the French Riviera, in particular, Nice.  There are various cuisines to choose from including Indian, Thai, Chinese, Japanese, American, and more.  Nicoise cuisine is the main cuisine in Nice which has a significant amount of Italian influence due to its proximity to Italy.  Pizza is extremely common in the region and you'll typically find a few olives on top of a simple Margherita pizza.

You could very easily spend at the very least 4 nights to a week in the French Riviera strolling, shopping, trying new foods, visiting the Chateau in Nice, people watching, hitting the beach, and visiting the towns nearby. 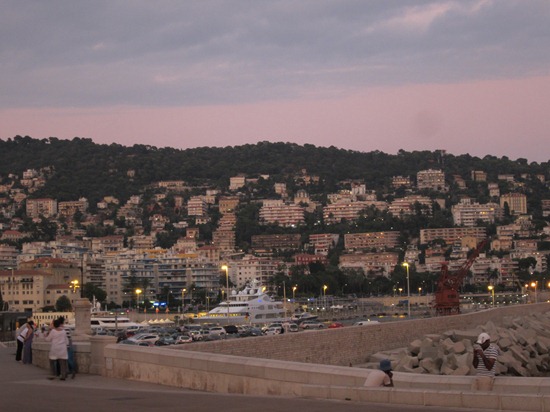 You will need about 2 days just to scope out Nice alone.  Again, I recommend staying in Nice as a base and doing day trips to the following cities by bus/train/renting a car:
Antibes - Cannes (this can be done the same day; I skipped Antibes)
Eze Village - Monaco-MonteCarlo (this can be done the same day; I did both)
St.Tropez - this is further west, consider visiting if you have time. (I skipped St. Tropez)
St.Paul-Vence - very similar to Eze Village.  I have heard mixed reviews on St.Paul-Vence vs. Eze Village being better.  (I skipped St.Paul-Vence and visited Eze Village instead.) 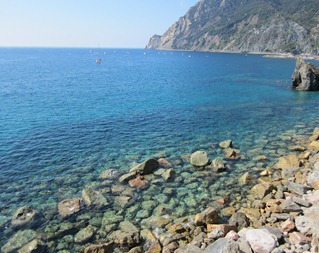 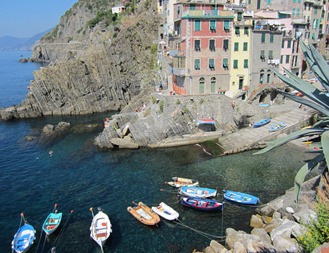 After France, we headed over to the Italian coastline by train and finally reached our destination of Monterosso al Mare, the main village in the Cinque Terre (five villages).  Out of the five villages in the Cinque Terre, I would say Monterosso is the best as it is more developed, prettier, offers a beautiful beach, and a bunch of Italian restaurants.  You will sense a calmness in the tranquility that surrounds you in Monterossso.  This literally is the perfect place to blog, sip a cappuccino, and enjoy the splendid views. 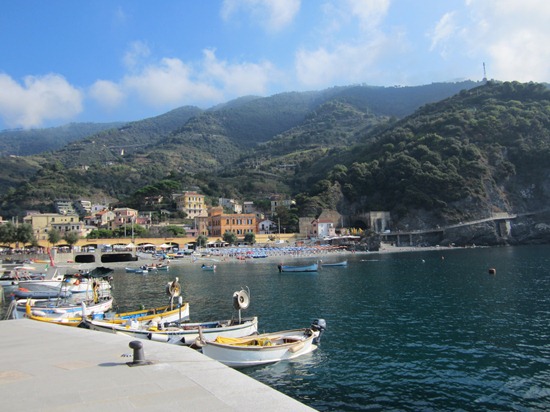 All five villages can be visited by train in one day.  On this trip, I was able to visit 3 out of the 5 villages, including Monterosso, Riomaggiore, and Manarola.  We weren’t able to cover all 5 villages since train delays are extremely common in Italy.  Although this was annoying for us, it is something that is inevitable in Italy and I just treated the situation as a fun adventure and stayed positive.  It is wise to have other alternatives in mind incase things don't go according to plan. 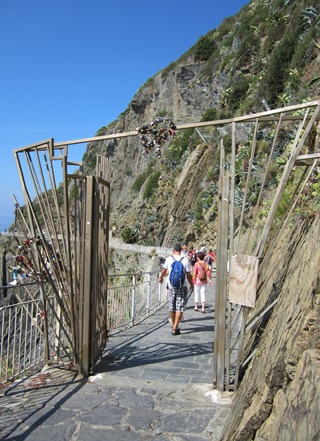 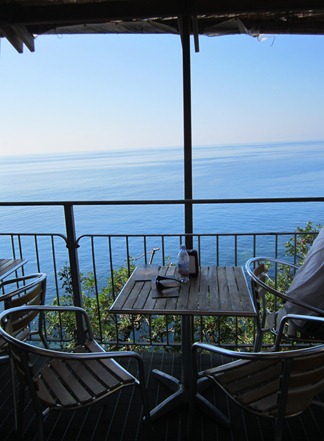 After spending 2 nights in the Cinque Terre, we headed north to Rapallo.  From Rapallo we were able to visit the most famous city on the Ligurian Riviera - Portofino.  Portofino is home to the rich and famous and a celebrity hangout.  Definitely pay a visit to Portofino to see what the hype is all about.  Quite honestly, I wasn't so impressed, but I had to visit Portofino and see for myself.  Since Portofino is extremely expensive, it is wise to make Rapallo or Santa Margherita Ligure your base and visit the neighboring cities.  Personally speaking, both Rapallo and Santa Margherita Ligure pretty much look the same, however I found Rapallo to be a little nicer than its rival and it is about $100 cheaper per night. 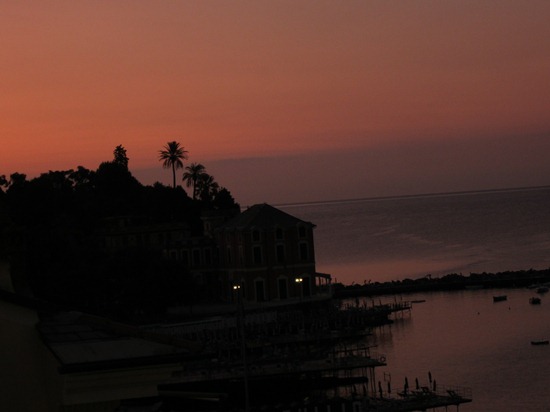 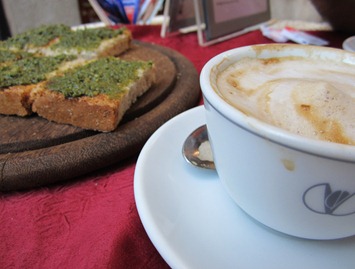 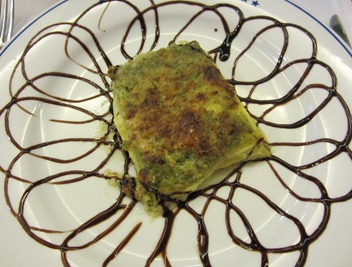 In general, Italy is one of those countries blessed with so much beauty and a country I will keep visiting in my lifetime.  Every region has so much to offer and you really can’t go wrong with any of them.  Seriously, besides their dreaded train line (TrenItalia), everything here is perfect from the food, to the wine, to the fun culture, to the warmth of the Italian people, and to the beauty that surrounds each region.

If you do plan on visiting the Italian Riviera, I would recommend one of the two itineraries below:
a. If you are into the old look and feel and would like to be around a nice beach, spend 2 nights in the Cinque Terre making Monterosso al Mare your base.  Don't bother considering any other village, trust me.  Monterosso al Mare is beautiful with more modern facilities and Bed & Breakfasts are very common here.  I would then spend 2 nights in Rapallo or Santa Margherita Ligure and explore Rapallo, Santa Margherita Ligure, and Portofino.


b. If you aren't into the old look and feel, then making either Rapallo or Santa Margherita Ligure your base is the way to go.  The facilities here are very modern and you can easily get a hotel in the area.  From your base, visit the Cinque Terre region which can be covered in one day, just make sure you start early.  Spend the remaining 2 to 3 days in Rapallo, Santa Margherita Ligure, and Portofino.  I personally think if you do this itinerary, 3 nights is enough. 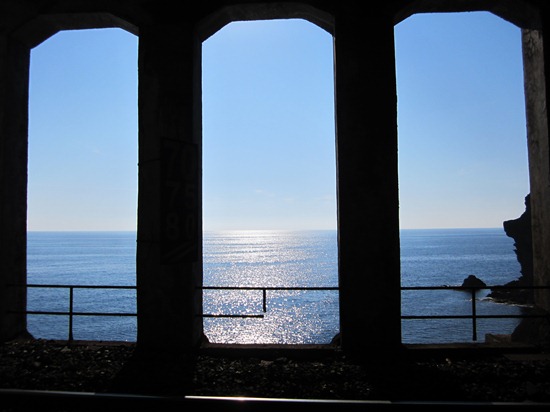 
Travel Tips for Europe:
- When traveling to Europe, opt for the house red wine which is dirt cheap. Cocktails (hard liquor) aren't as easily available so go for red wine which is also good for you.
- Know the local cuisine before you go.  For example, pesto is the dish to order when staying on the Italian Riviera.
- Dining out 3 times a day can quickly get expensive, to be frugal and romantic at the same time, grab a pizza pie and a bottle of wine and head to the beach.  You will find many locals/tourists doing this on the French Riviera, in particular.
- Most European locals eat dinner later than Americans.  The best time for dinner is usually after 8 pm.  Typically around 5 pm I would grab a coffee and a dessert to curb my appetite for a few more hours.
- Tipping in Europe isn’t expected as it is here in the United States, however it is appreciated to leave something.  Anything from 1 Euro to 4 Euros would be appreciated.  Also keep in mind a few places do amount for a cover charge, typically 2 Euros per person.  Again, it all depends on you and the service you receive.
- Make sure you take an electric converter, there are universal ones available which you can use in almost every country.
- Travel light!!!  I can’t stress this enough, travel light!  There are areas in Cinque Terre where cars are not allowed, so you literally need to drag your luggage to your hotel/B&B.  Also, if you have multiple destinations involved, it helps when your luggage is light.
- Train delays are very common in Europe, particularly in Italy, plan alternative routes just in case.
- Typically public facilities aren't the best in Europe so always use your hotel restroom prior to leaving.
- Pick a city as a primary base and visit neighboring towns rather than checking in and out of multiple places.
- Withdraw money from a well known bank's ATM to receive the best exchange rate.  Use cash as much as possible to avoid unnecessary foreign transaction fees.
- Europeans drink their coffee different than most Americans do, and so if you want American Black Coffee, you need to specify American Coffee (Caffe Americano).  The most popular types of coffee in these regions are as follows:
Spain - Cafe con Leche (coffee with milk)
France - Cafe au Lait (coffee with milk)
Italy – Caffe Latte (coffee with milk)
- Learn a few words before visiting a country, such as, Hello, Bye, Thank You, Please, Excuse Me, Where is, How much, I would like.  Know how to say the numbers from 1 to 5 at the very least.  Although most Europeans do speak English, as a visitor in their country, it is respectful to learn a few words in the local language to ensure basic communication. 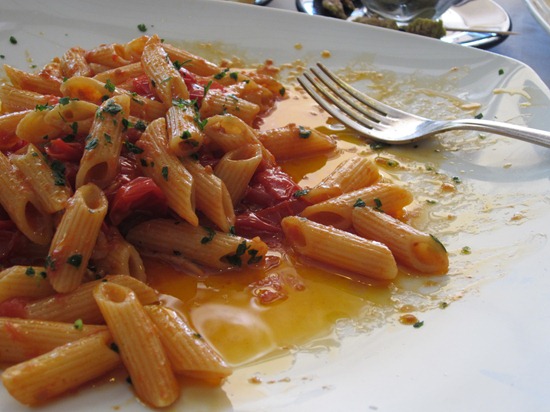