2013 involved a good amount of travel which means I had the opportunity to eat a LOT of regional food.  This past year’s highlights included Greece, Turks and Caicos, Miami, Montreal, and of course, New York City!
p.s. I really need to start posting these in the last week before New Years as opposed to after the New Year.  I’ll be better prepared next time.
Enjoy!

1. Banana Rum Cake @ Sowewhere Café, Grace Bay Beach, Providenciales, Turks and Caicos
Warm banana cake spiked with Rum, and then topped off with cold ice-cream.  I closed my eyes while I savored every bite, this may just go down as the best thing I ate in 2013.  A divine concoction, and you’ve gotta go to Turks and Caicos to get it. 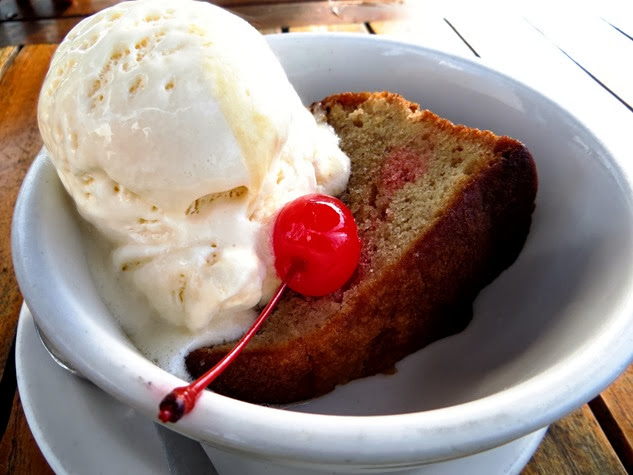 2. Shrimp Salad & Warm Chocolate Cake with Vanilla Bean Ice-Cream @ Nougatine Jean Georges (Trump Hotel), New York City
If you ever have a chance to try the price fixe lunch menu at Nougatine Jean Georges, DO IT!  For $32, you’ll eat perhaps one of the best meals of your life.  The shrimp salad here is exceptional with avocado and tomato, but it is the champagne vinegar dressing that sets it apart from any other salad I’ve ever known.  And as for the warm chocolate cake, I think the picture below says it all.  Hot chocolate oozing out and vanilla bean ice-cream to go with it.  If this doesn’t rock your boat, I don’t know what will. 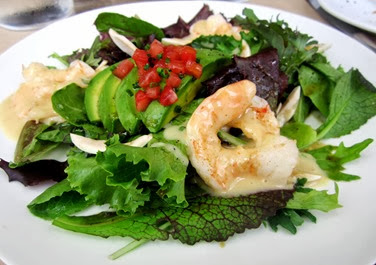 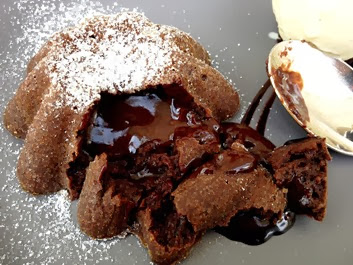 3. Murg Lababdar @ Junoon, New York City
Junoon is the BEST Indian restaurant I have ever been to, not only is it classy and upscale, but it is also a Michelin Star restaurant.  The brains behind it is Executive Chef Vikas Khanna.  The food here is innovative and tasty.  My favorite dish is the Murg Lababdar which is essentially chicken tikka cooked in a tomato and onion sauce seasoned with fenugreek and ginger.  Pair this up with the Junoon Spiced Naan prepared with Gruyere Cheese and you’ll be in heaven, told you the food here is innovative. 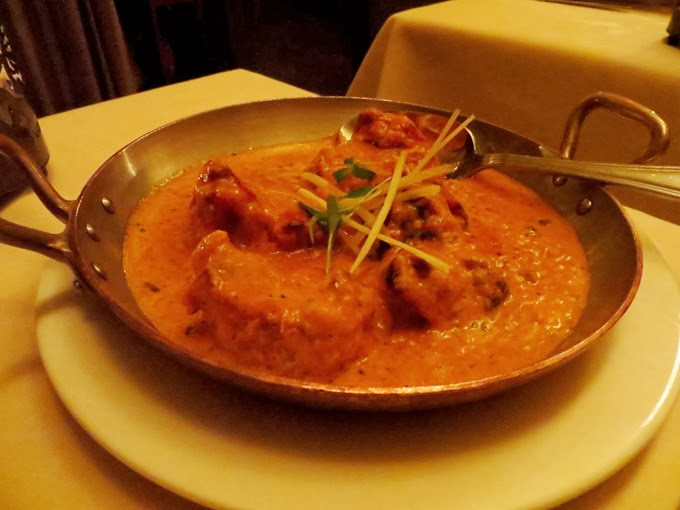 4. Tagliolini Mushroom Truffle @ Cecconis (Soho Beach House), Miami Beach
It’s no surprise that I love mushrooms like there is no tomorrow, pour some truffle oil on top, and I’m sold.  This heavenly dish says it all.  Located in Soho Beach House, Cecconi’s is classy, gorgeous, and romantic decor and not as terribly priced as one would imagine it to be, you definitely get “some” value for your money. 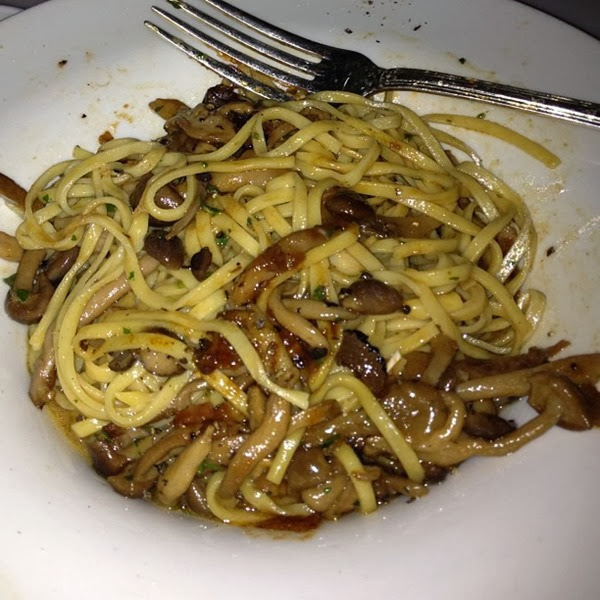 5. Orzo Pasta with Shrimp @ Karavaki Restaurant (Vencia Boutique Hotel), Mykonos Town, Mykonos, Greece
Italian food is quite popular in Greece, however the Greeks refer to it as Mediterranean food.  Well, whatever the cuisine may be, this dish was phenomenal.  Orzo Shrimp Pasta cooked in a velour lobster and truffle sauce, just so flavorsome, I still dream about it sitting thousands of miles away. 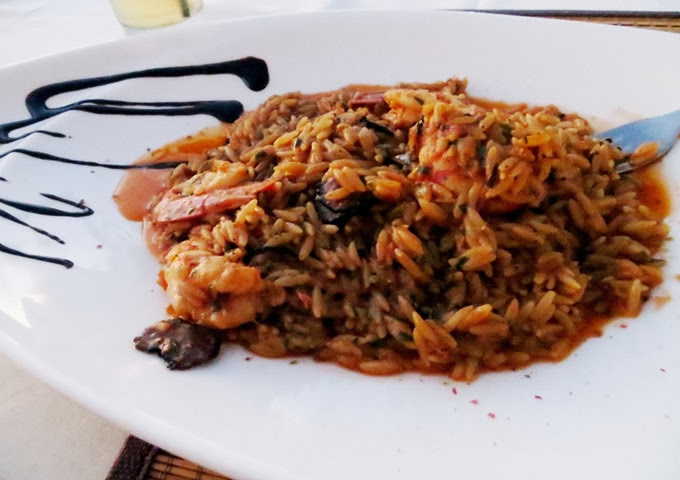 6. Illusion @ Veranda, Little Venice, Mykonos, Greece
And while I’m talking about Mykonos, I might as well tell you about this scrumptious drink prepared with Rum, Vodka, Cointreau, Melon Liqueur, and Pineapple Juice.  OMG!  Grab a drink by Little Venice and watch the sunset, it’ll easily be one of the best moments of your life, or perhaps an illusion.  Hopefully you’ll be sipping the Illusion! 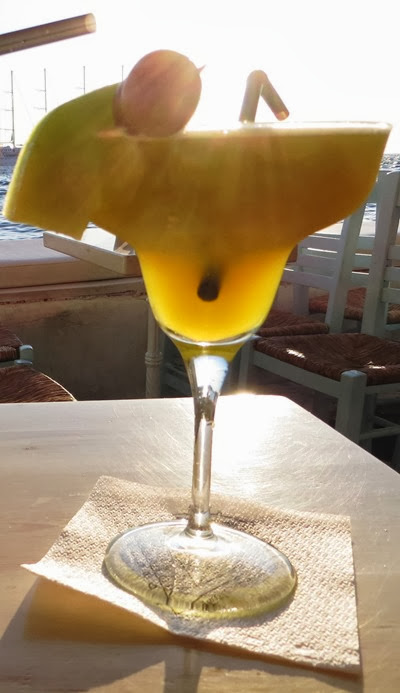 7. Mac & Cheese @ Yardbird Southern Table & Bar, Miami Beach
Mac & Cheese is my favorite all American comfort food.  This outstanding mac and cheese is prepared with butter, cream, cheese, and then topped off with crunchy bread crumbs… I joke that you may die after every artery clogging bite, but you’ll sure die happy.  Worth every bite! 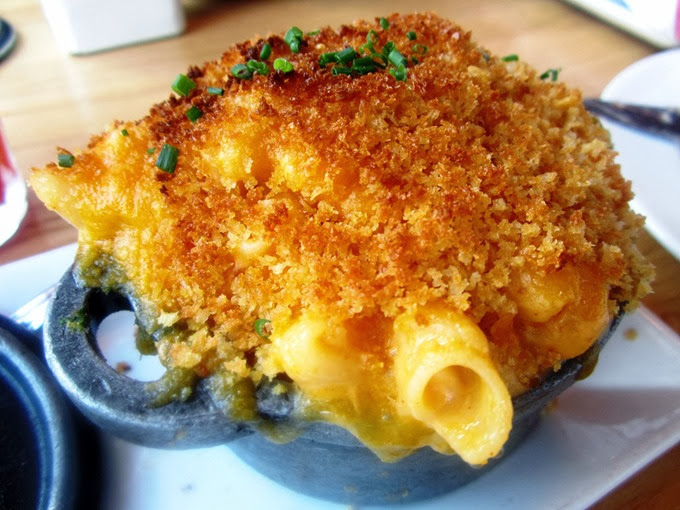 8. Watermelon Mint Mojito @ Stelle Bar + Grill (Gansevoort Hotel T&C), Grace Bay Beach, Providenciales, Turks and Caicos
It was about 4 pm in the afternoon when I decided to treat myself to a drink at the beach.  This watermelon mint mojito was so delish, I drank it in about 10 minutes, and then I passed out on the beach for 1 hour.  It was probably one of the best drinks I had, and one of the best naps I had under the Caribbean sun.  To top it off, this divine mojito is made with seriously fresh mint and there are fresh cubes of watermelon floating around.  Get it, at the Gansevoort Turks and Caicos – best hotel, ever! 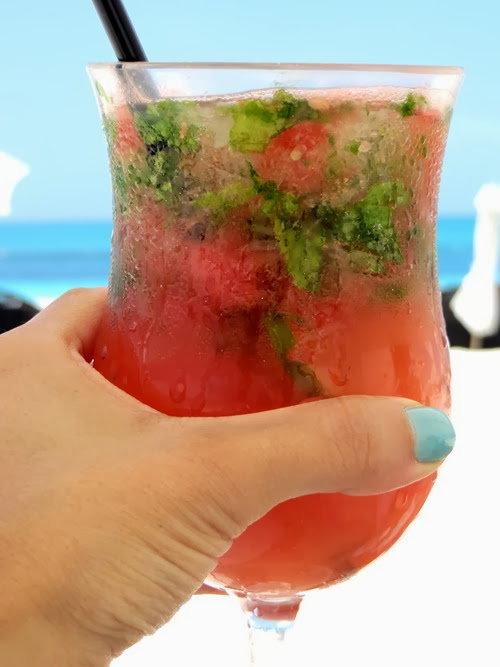 9. Masala Chai @ The Masalawala, New York City
If you’re looking for authentic and affordable Indian food, then look no further than The Masalawala.  The owners are so friendly, and the service is great, but the food is in a league of its own.  Out of the 10+ dishes I tried, practically every dish was amazing, my favorites were the Konkani Shrimp Curry and Chicken Tikka, but perhaps the most memorable moment was sipping Masala Chai.  The Masalawala really has the BEST Masala Chai in Manhattan… light in consistency, robust in flavor. 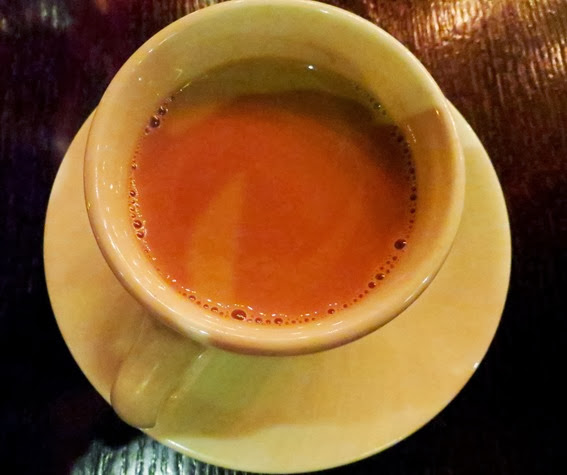 10. Moussaka @ Niki Restaurant, Fira, Santorini, Greece
Y’all know that I don’t eat red-meat, but trying to find Vegetarian Moussaka in Greece is nearly impossible.  At Niki Restaurant, I decided to order Moussaka because I had to taste the one dish that was home to Greece!  I meant to have only a couple bites, but I ended up cleaning off the entire dish.  Imagine this… layers of potatoes, eggplant, sauteed beef with hints of cinnamon, and then finished off with a creamy bechamel sauce.  Oooooh yeah!  You can’t deny the fact that I look pretty happy! 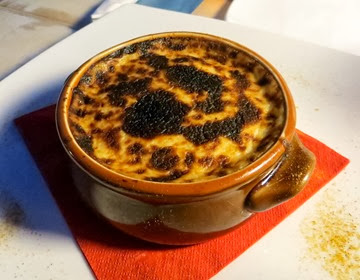 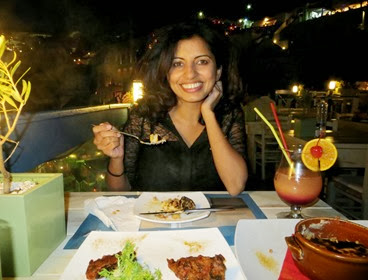 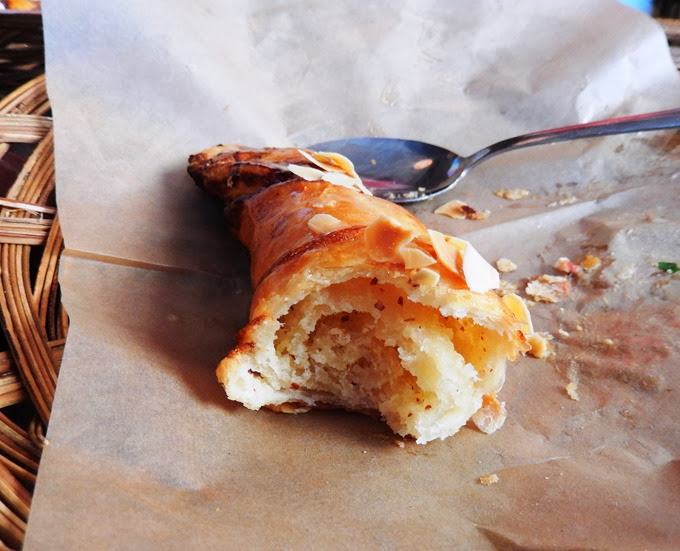 12. Mango Custard @ Hakkasan (Fontainebleau Hotel), Miami Beach
Truth be told, I honestly don’t care for the over-hyped Hakkasan, the décor is gorgeous though, the appetizers are good, but the food, meh.  In short, the food is overpriced and not good.  On the other hand, the dessert is something to write home about, especially this Mango Custard which has a mousse-like consistency with hints of coconut that sort of melts in your mouth.  A heavenly concoction and beautiful presentation! 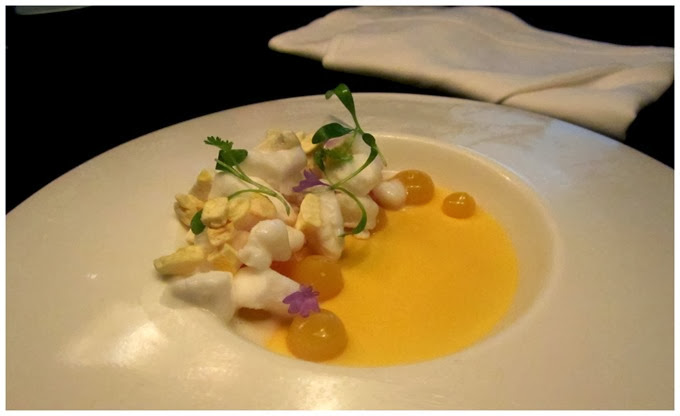 13. Vanilla Bean French Toast @ Jane, New York City
Jane is one of the most popular brunch spots in New York City, make reservations in advance otherwise you’ll end up waiting for a couple hours.  Their most highly rated dish is the Vanilla Bean French Toast made with brioche bread in a crème brulee batter, oh yeah baby, and then it’s topped off with Vermont maple syrup.  I probably gained like 5 pounds after I was done, but that’s the thing about Manhattan, you have to walk, everywhere! 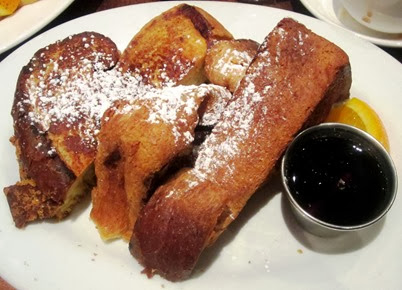 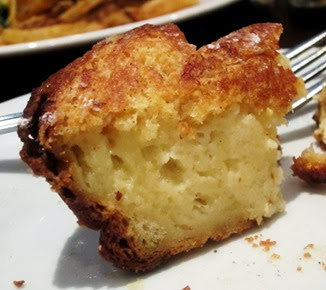 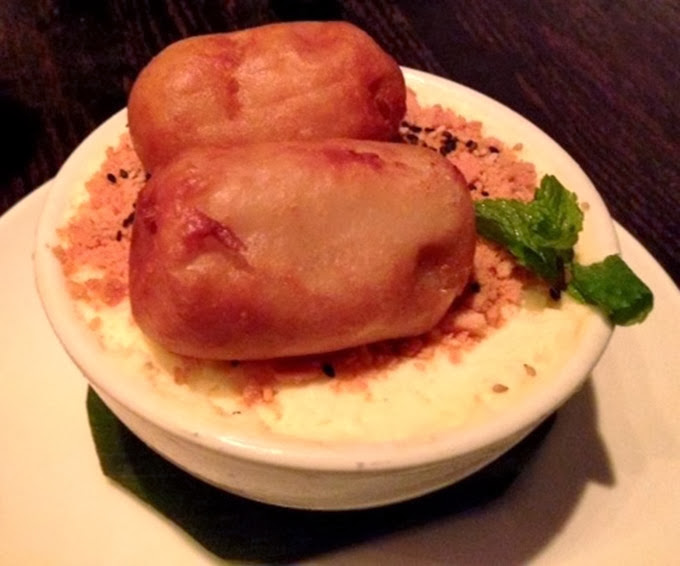 15. Mashed Potatoes @ Nikolas Taverna, Fira, Santorini, Greece
I ordered fried cod in Greece, I know, why?  But man, the cod came with mashed potatoes on the side which were sensational.  Flavored with extra virgin olive oil and a ton of garlic, these mashed potatoes were the most delicious and probably the healthiest version I’ve had to date.  I need to replicate Greece’s version, soon.  I miss Santorini.

TELL ME: What are some of your most memorable dishes of 2013?  Restaurant & Location?