Dhaba means an eating shack on a roadside typically offering delicious, yet inexpensive, Punjabi food.  Nowadays in India there are all sorts of dhabas offering all different types of Indian cuisine. 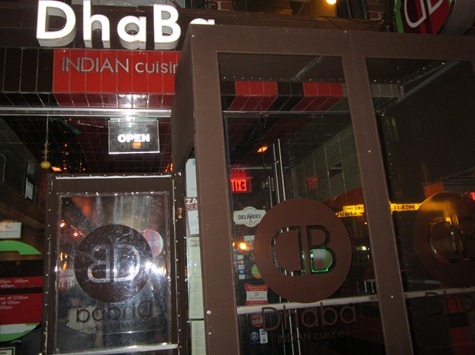 
AMBIENCE:
This past weekend I headed to Dhaba, an Indian restaurant located on Lexington Avenue, and although the food was delicious, the restaurant was no shack, but rather a sit down.  Dhaba is romantic and dimly lit making a good choice for a date or small groups. I was on a double date with my husband, my friend (Vrushali), and her husband. 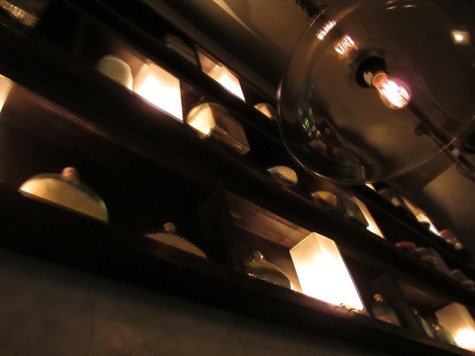 I loved the sari rolls alongside the wall which is typically what you'll observe when shopping at a store that sells saris. 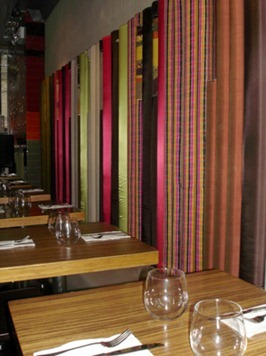 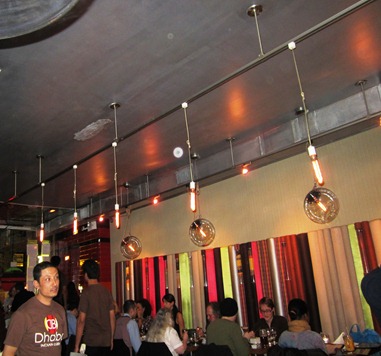 MY REVIEW
We were served Papad as complimentary appetizers.  Papad is a thin, crisp, baked/fried Indian cracker which was served alongside 3 different types of chutneys… tamarind, mint, and a slightly sour onion chutney (yummy).

I did the honors and started off with a Lychee Martini.  The martini didn't even taste like lychee juice to me and I missed having a lychee at the bottom of the martini glass.  This drink was below average for me. 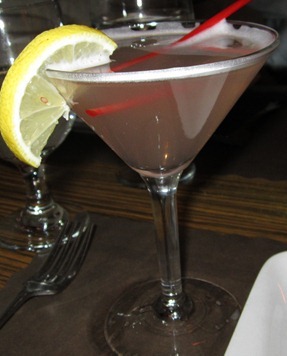 Since my first drink was weak, I went for the Kamasutra Martini, sounds seductive, huh?  Well, it wasn't, but it sure is pretty!  This drink was extremely sweet and frothy, it was as though I was drinking syrup.  It was even milder than the first drink. 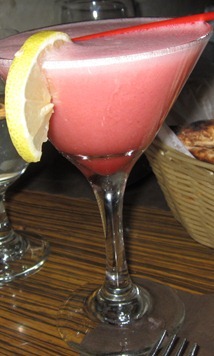 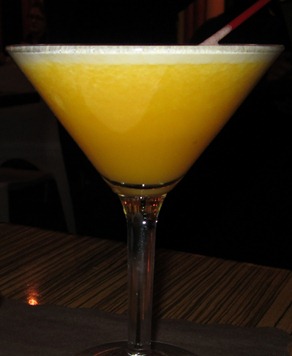 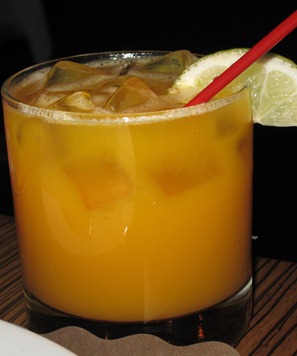 Between the 4 of us we shared 4 entrees.  I really wanted to try the Methi (fenugreek) Chicken which was excellent.  The dish was a blend of Indian spices, ginger, garlic, onions, tomatoes, and fenugreek leaves.  The methi chicken had a slightly distinct flavor and I am almost convinced I tasted carom (ajwain) seeds amongst the spices used.  Excellent, delicious, & well prepared. 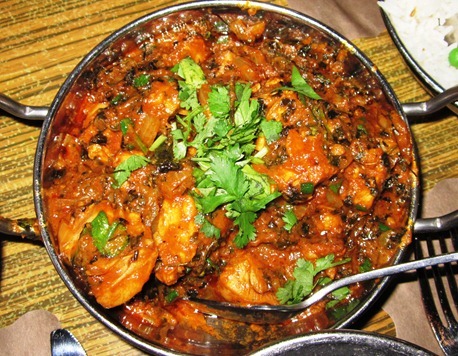 For the Punjabi Murgh (chicken) Curry, I requested boneless white meat chicken which was a let down.  The gravy was good, however it appeared as though the chicken and gravy were not even cooked together, but rather the chicken was added to the gravy later on.  Being of Punjabi origin, I can attest to the fact that this dish was mediocre and lacked the richness one would expect from Punjabi Murgh Curry.  Perhaps, it would have tasted better had I ordered it on the bone. 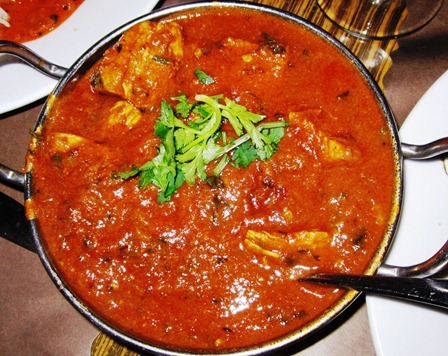 Next up was the Malai Kofta which are fried vegetarian balls (kofta) submerged in a cream (malai) cashew gravy.  This dish was mild in terms of spice, mouthwatering and authentic.  It went perfectly with naan and/or rice. 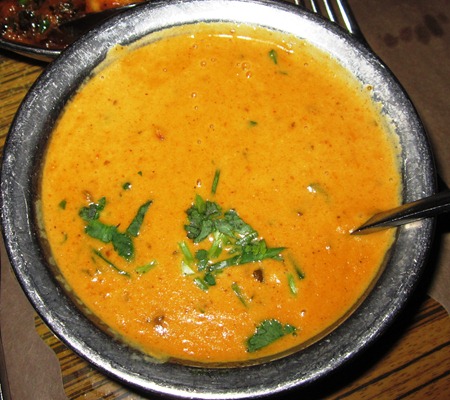 My favorite dish amongst all those ordered was the Goa Fish Curry which was a blend of coconut, mustard seeds, black pepper, and tamarind in a rich reddish-brown gravy.  In this dish there were a melody of flavors… the richness from the coconut, the spice from the black pepper, and the tanginess from the tamarind.  Yes, the Goa Fish Curry was outrageously delicious.  And just fyi, the fish used for this dish was tilapia, a mildly flavored fish and healthy, too. 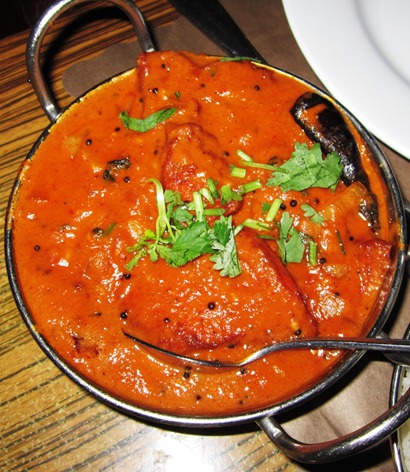 Between the 4 of us, we shared 2 orders of Basmati Rice and 2 orders of Garlic Naan which came at an extra cost.  The garlic naan was excellent, you could really taste the garlic and butter - which you can't really go wrong with, although the naan was slightly burnt. 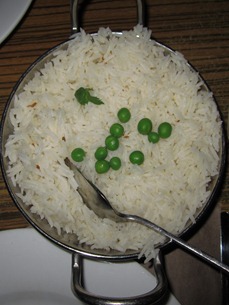 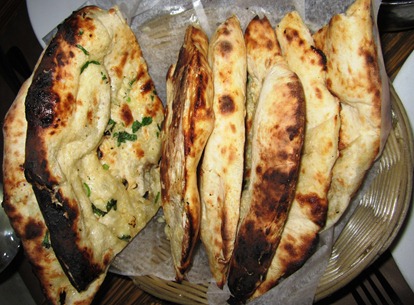 Here is a picture of my first serving, yeah, I take a little bit of everything to fully enjoy the experience.  So good! 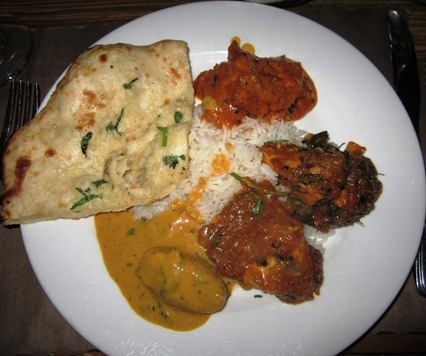 VERDICT: 4 / 5
The waiters at Dhaba were helpful and friendly, and although it took them a while to bring the food out, I can forsake this since Indian food does require some time to prepare.

The food at Dhaba is legit and authentic.  I really enjoyed 3 out of the 4 dishes served to us.  The food here is oily, but not as oily as some other Indian establishments that I've been to.  Furthermore, between the 4 of us we had enough food left over for 1 more person.  You can easily getaway with ordering 3 entrees for 4 people provided you order some non-vegetarian entrees.

The menu at Dhaba is vast.  Almost every single dish on their menu was something my mom cooked for me while growing up.  For example, dishes such as Tinda Ka Subzi, which you’ll almost never encounter at an Indian restaurant can be found at Dhaba and most Indian households.  The food here has a nostalgic feel.

In terms of drinks, I was extremely disappointed.  At $9 a drink, the drinks were lousy, they were either too sweet, or not spiked enough, or just all wrong in flavorings.  They need to work on making better drinks and perhaps come up with a more exotic drink menu, I mean this is an Indian restaurant.  And for this reason I believe Dhaba deserves a 4, and not a perfect 5.

Overall, great Indian food, romantic ambiance, and friendly service.  I will definitely be back for more dhaba style food at Dhaba and particularly look forward to trying their Murgh Bharta (I've never heard of this style of chicken), Chicken Tikka Masala, Dahiwala Murgh, and Dahiwala Bhindi.


TELL ME: Have you been to Dhaba, if so, what did you think?