Over a month ago I posted Naan Pizza with Peppers & Onions; Lesley who works at an advertising agency luckily saw my post and contacted me regarding my interest in sampling the four new flavors for Naan Pizza.  Of course, I responded, “YES!”

I read your blog on naan pizza, and I thought you might be interested in taste testing Tandoor Chef’s new Naan Pizza!  Tandoor Chef, the leader in all natural, restaurant quality frozen Indian cuisine, just launched a new Naan bread pizza, which is currently rolling out nationwide. The new pizza is fired in a real Tandoor oven and is the first of its kind to hit the frozen food aisle blending Indian and Italian flavors.

Perfect for kids snacks or a light lunch, this new pizza is light, crisp and very unique. With four unique vegetarian flavors, including Margherita, Cilantro Pesto and Roasted Eggplant, the new Naan Pizza appeals to a wide range of palates. Let me know your thoughts—I’d love to send you samples to consider reviewing!

My Tandoor Chef Naan Pizza package arrived about 2 weeks ago and I was sooooooo excited to receive not 1, but 4 samples of the different pizza flavors – Margherita, Roasted Eggplant, Cilantro Pesto, and Spinach & Paneer Cheese.  To be completely fair, I wanted an honest review from a group of people.  My brother and sis-in-law recently had a family get together in their home, so I took my pizza samples over for taste testing.  I followed the instructions and baked each pizza for about 10-12 minutes.

NUTRITION – from a Nutrition perspective alone, I would say the Cilantro Pesto Naan Pizza seems to be the best choice.  This product contains the least amount of cholesterol, sodium, and carbohydrates, relatively speaking.  In addition, the Cilantro Pesto Naan Pizza only contains 1 g of saturated fat, 4 g of fiber and 11 g of protein per serving – NOT BAD AT ALL!  However the sodium is extremely high on these products and each pizza is 2 servings – NOT GOOD! 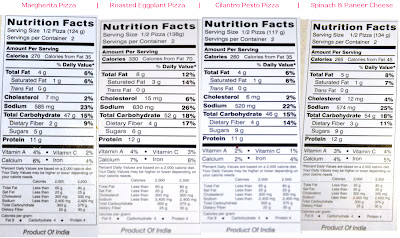 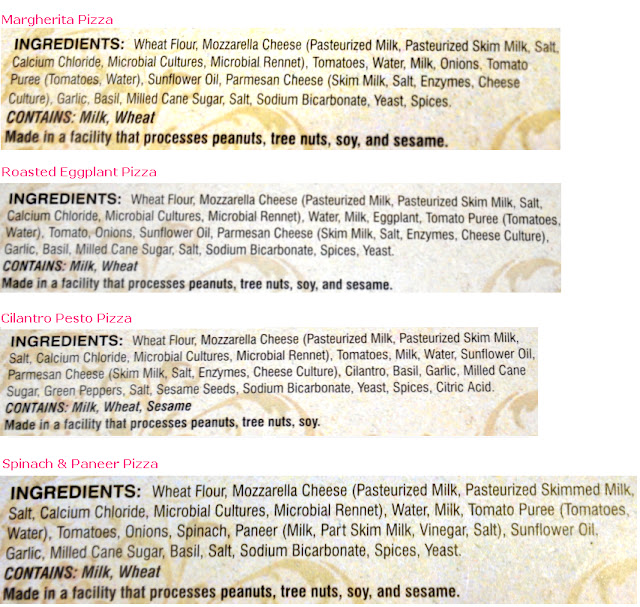 You can purchase these at any Indian grocery store.  Here are a list of the American grocery stores that carry Tandoor Chef.  I am impressed this brand is sold at Whole Foods.

APPROXIMATE COST
Not sure.

PROS:
All Natural
No GMOs
High Protein
No Preservatives
No Trans Fat – I will never review a product with Trans Fat!
Made with Wheat Flour
CONS:
Extremely High Sodium
High in Calories for 1 serving which is only half a pizza.
Wasn’t able to locate a manufactured date and expiry date – I searched on every box.

VERDICT – 3 / 5
Right off the bat I have to say the sodium in each pizza was extremely high.  I guess the assumption is that most people of Indian origin eat foods high in sodium, this may be true for many, however not all.  I found the sodium level to be extremely high, as did most of my tasters.  To be completely honest, I was disappointed with the nutrition per pizza.  I was surprised each pizza equates to 2 servings.  On my own, I would probably be able to eat 1 Naan Pizza which amounts to a whole lot of calories and sodium.

On a positive note, once baked, the pizzas did not taste frozen to me and the naan was tasty.

Review of Margherita Pizza: This Margherita Pizza was one of the better pizzas with more sauce.  This pizza tasted more like the traditional pizza we are all accustomed to.  The texture was crisp and cheesy.  Most tasters said this was their second favorite pizza, as did I.

Review of the Spinach & Paneer Pizza: Most tasters did not enjoy this pizza because it tasted bland and a few mentioned there was too much garlic and not enough spinach.  The paneer flavor was a little dominant in this pizza, it would have tasted a lot better if the paneer was cubed into smaller pieces and then topped off with spinach.  The flavors would have blended a little better.
10% with an Indian palette voted this as #1.
10% with an Indian palette voted this as #2.


WOULD I PURCHASE AGAIN – No
I believe good food can be healthy and tasty at the same time – I certainly am able to do it.  The pizzas were good, but not amazing and were not quite as healthy as I had hoped.  Based on the nutrition alone, I would have serious doubts purchasing these pizzas.  The sodium alone is way too high and it was obvious with every bite.  Furthermore, the calories are way too high for just 1 slice of pizza, each slice equating to 2 servings which is hard to digest, that’s 660 calories in the Roasted Eggplant – my personal favorite, or 540 calories in the Margherita – my second favorite.  Quite frankly, for 500 calories why not indulge in a real slice of New York pizza for just $2.50?  Think about it!

On the contrary, I was happy to see these products contain NO GMO’s, which is HUGE!  Nowadays, how many products don’t actually have GMO’s, I believe very few in the United States.  In addition, Tandoor Chef’s product is All Natural.  Also, I applaud Tandoor Chef for coming up with these unique pizza flavors – especially the Cilantro Pesto and Spinach & Paneer Pizza, both of which tasted more Indian.  For a unique flavored frozen pizza, Tandoor Chef is probably one of the better ones I have tried.

I truly appreciate Tandoor Chef sending me their products to review, however I have to express my honest opinion in my reviews and the opinions I received from my tasters.  Without sounding too harsh, I am not willing to sacrifice my calories for a frozen slice of pizza which racks up at least 520 calories per slice.  In addition, the sodium has to be lowered for me to even consider purchasing these again.  I believe a good alternative would be a low-calorie/low-sodium version.  Thoughts?


Tell Me: If you tried this product, what are your thoughts on it?