As usual I did my research and came up with a bunch of restaurants to try, however French food was not on my list.  My husband turned to me and said, “we’re going to Montreal and we’re not having French food.”  Amazed at his comment I responded back, “I thought you weren’t a fan of French food, but if you wanna have some, then sure I can find something.”

Keep in mind that neither one of us can really handle restaurants that are “too French,” and thus I had to make sure chicken, shrimp, salmon were some of the items on the menu.  Well, on every site I checked, one of the most popular French restaurants in Montreal seemed to be L’Express, and so I finally got a 9:45 pm reservation at this overbooked restaurant.  Unfortunately we were both extremely disappointed, and even more so because we waited until 10 pm to finally eat dinner.  Well, let’s just say him not enjoying his meal and me selecting the wrong French restaurant became all my fault.  What?  How did that happen?  Unfortunately, the reviews failed me in both restaurants. 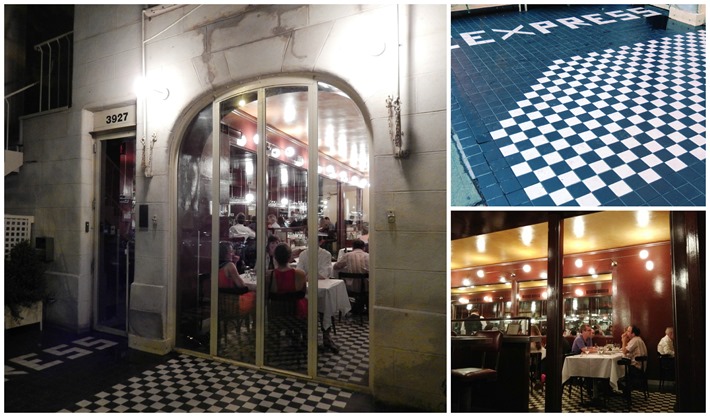 Both my husband and I started with a glass of wine.  He went for a light Pinot Noir (left), whereas I went for a glass of Touraine (right) recommended by my waiter.  My husband’s wine was good, mine was not good, it was too rich in tannins. 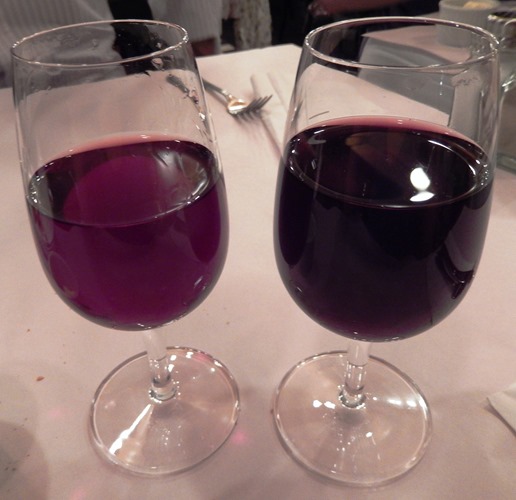 And then came the best part of our meal, bread and butter.  I know, it’s sad.  Let me just tell you though, the butter was extraordinary, I don’t know what was in it, but it just tasted different.  More than half my meal was bread and butter. 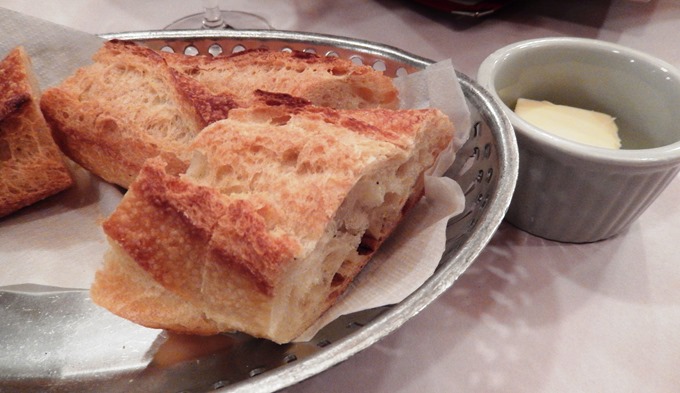 As for my entrée, with 2 salmon dishes as part of main course, I knew what I was getting, yup, salmon.  Fresh Grilled Salmon on Spinach Bed.  Is it just me, or does this look really unappetizing?  The only flavor in this dish was salt and pepper, it wasn’t oily, it wasn’t buttery, and quite frankly I’m not sure what was so French about it?  Isn’t French food suppose to be loaded with fat?  This looks more like a weight loss meal.  Highly disappointing with no real flavor. 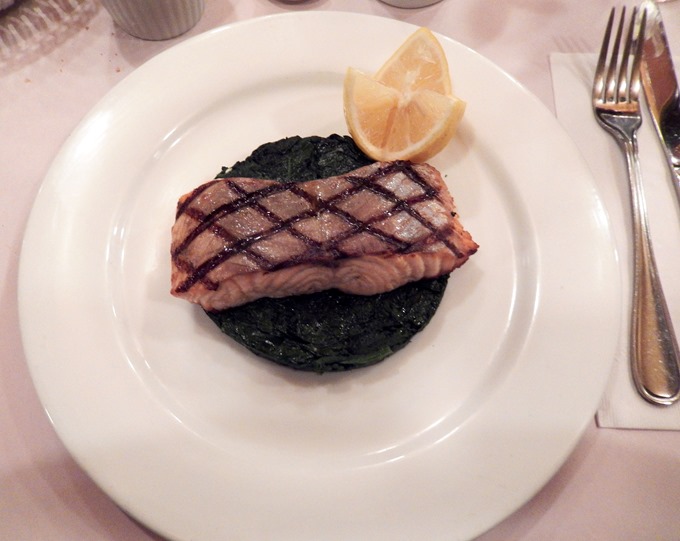 My husband went for the Shrimp Risotto, not exactly French, but a French twist on an Italian classic.  Let’s just say, we both prefer the Italian version more with extra virgin olive oil and butter.  The French version wasn’t buttery enough, that wine flavor wasn’t prominent enough, but the rice was perfectly cooked thru and the shrimp was tasty.  Just mediocre. 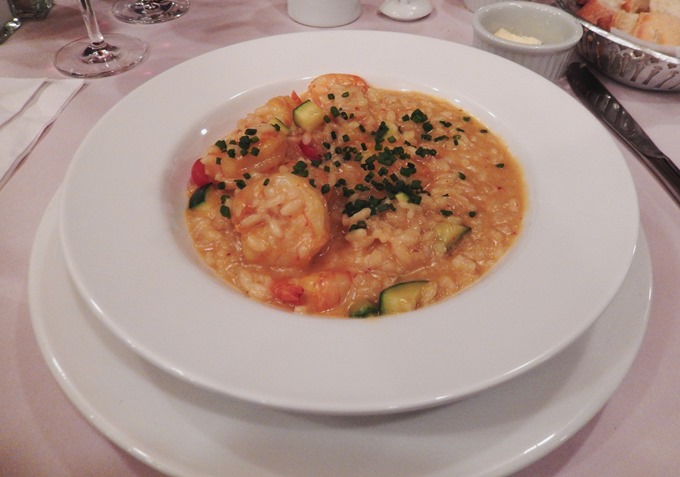 And with one failure after another, we still mustered up the courage to order dessert – Apple Pie.  It was alright, nothing to write home about.  My favorite part was the crust, obviously, but Mrs. Smith’s still wins the best Apple Pie in my book.  Yes, my palette is probably not sophisticated enough. 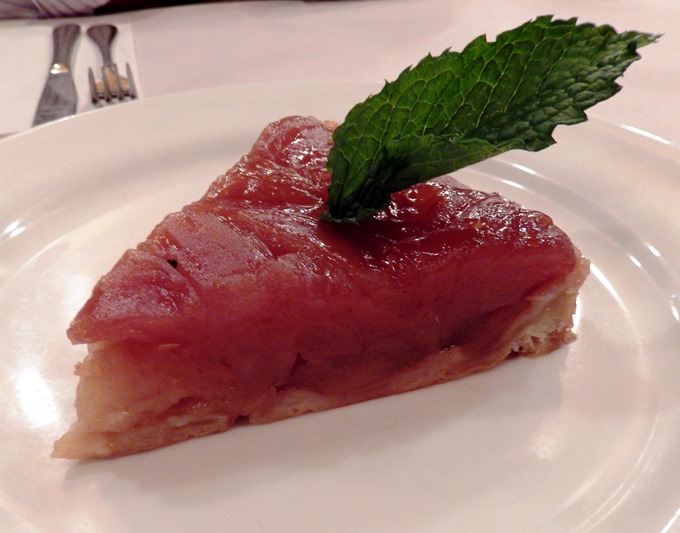 LOCATION: 3927 Rue Saint Denis, Montreal, QC
MENU: L’Express menu
COST: $$$
CUISINE: French
VERDICT: 2 / 5
L’Express offers an extensive wine list, however this restaurant was extremely disappointing, nothing was good for me except the bread & butter.  This place was so booked that I had no choice but to settle for a 9:45 pm reservation.  I just don’t get what the hype is all about.  Granted that I don’t eat a lot of French delicacies, but I was still expecting a good piece of salmon.  Any dish at a French restaurant should be cooked in butter, I guess that’s what I expected with my salmon, but that wasn’t quite the case.  I won’t be returning, ever!
Food: Terrible| Drinks: Average | Ambience: Good | Service: Good | Value: Good 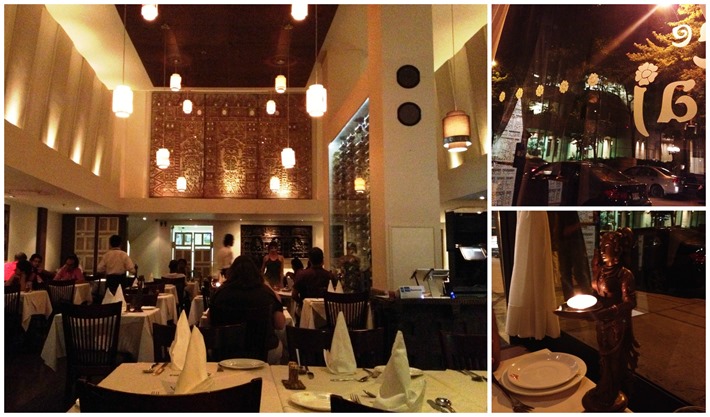 While my husband enjoyed a glass of Cabernet Sauvignon to pair with his Indian food, I opted for an Apple Martini, but why isn’t it green?  And where’s the cherry?

The martini was average. 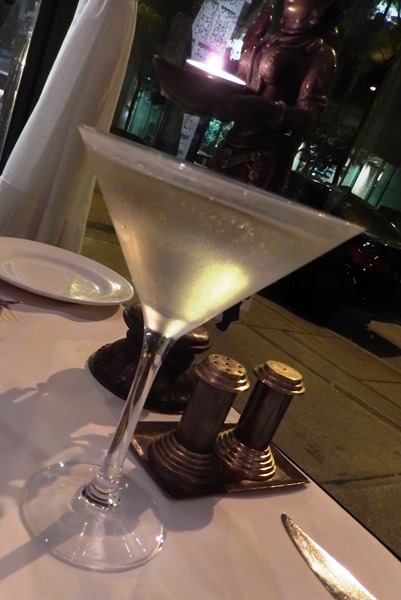 Between my husband and I we ordered 3 entrees… we definitely over did it which left me feeling very sick afterwards…
Butter Chicken (Murg Makhani) (left) – boneless chicken sautéed with butter and spices that is prepared with a cream based sauce.  This dish was extremely heavy given that it was made with cream and butter.  It was good, but the flavors were mild and not as flavorful.
Mix Vegetable Curry (center) – seasonal vegetables cooked in a gravy of onions, tomatoes, and freshly ground spices.  This was my husband’s choice… a simple dish, not something you want to order outside since it isn’t rich.
Baingan Bhartha (right) – roasted eggplant sautéed with onions, tomatoes, and fenugreek.  Baingan Bhartha is my all time favorite Indian dish and my mom makes it the best!  Le Taj’s version is well prepared and very spicy, however I felt the onions and tomatoes had to be sautéed longer.  Bhartha is one of those dishes that you need to slow cook for hours to get that smoky eggplant flavor to combine with the sweetness of the tomatoes which results in a highly flavorsome dish.  I could tell Le Taj’s version wasn’t cooked for a long time. 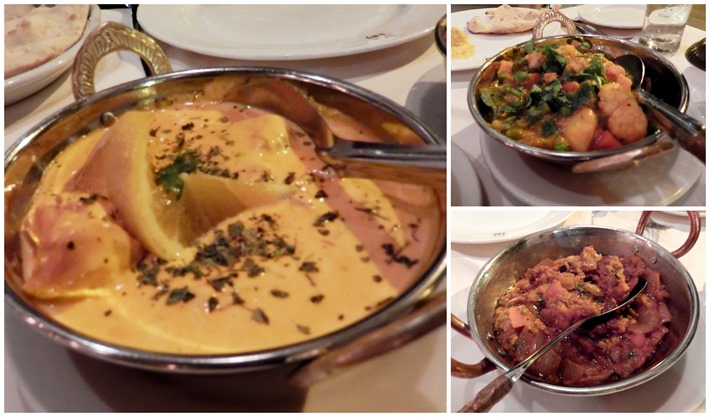 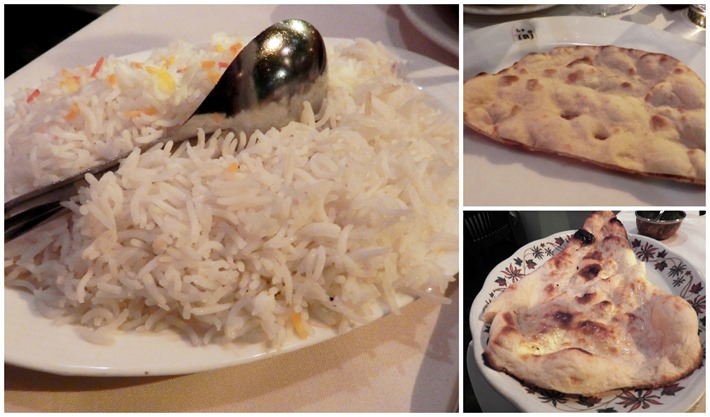 LOCATION: 2077 Stanley Street, Montreal, QC
MENU: Le Taj menu
COST: $$$
CUISINE: Indian
VERDICT: 3 / 5
Le Taj has an extensive menu with a lot of vegetarian items on the menu.  Being of Indian origin, I tend to be a little more critical of Indian food because I know what Indian food is suppose to taste like.  The 3 dishes here were all average to above average in my opinion, however the Le Taj rating was quite high on most websites.  I can see how people who aren’t familiar with Indian food would like this place, however for those of you who are familiar, the food here is mediocre.  With that said, I did enjoy the Baingan Bhartha, however it wasn’t cooked to perfection, and thus the flavors were not concentrated enough.  The ambience and friendly service made up for their average food.  Definitely a restaurant to consider if you find yourself in Montreal longing for some Indian food, or lots of vegetarian options.
Food: Average | Drinks: Average | Ambience: Excellent | Service: Excellent | Value: Good

TELL ME: If you have been to Montreal, what are some of your favorite dinner spots?