Due to Thanksgiving last week, I skipped posting on Black Friday and hung out with my sister in California, hence this week I have some “extra” Friday’s Favorites.  Enjoy!

Hot Fudge Sundae @ Ghirardelli Chocolate Company My family and I headed to San Francisco where we enjoyed the most delicious Hot Fudge Sundae.  OMG!  It’s no surprise I asked for “extra” hot fudge on the side.  Unfortunately though, I shared the sundae with my 10 year old niece, and I shamefully admit that I actually fought with her over who gets the hot fudge sections.  I know, I’m crazy!  As always, we were thinking of my late brother-in-law who was with us in spirit.  Missed you “A” – I think I ate extra ice-cream on your behalf.  ~ $9 each @ Ghirardelli Chocolate Company, Ghirardelli Square, San Francisco 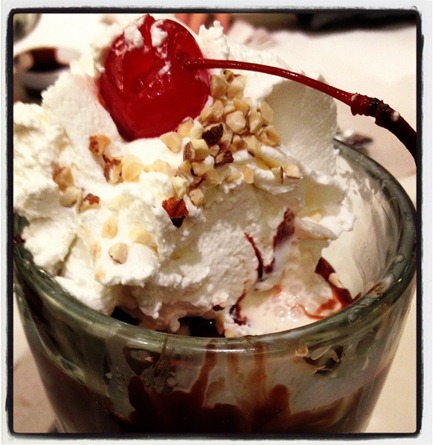 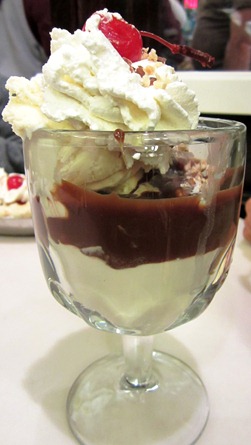 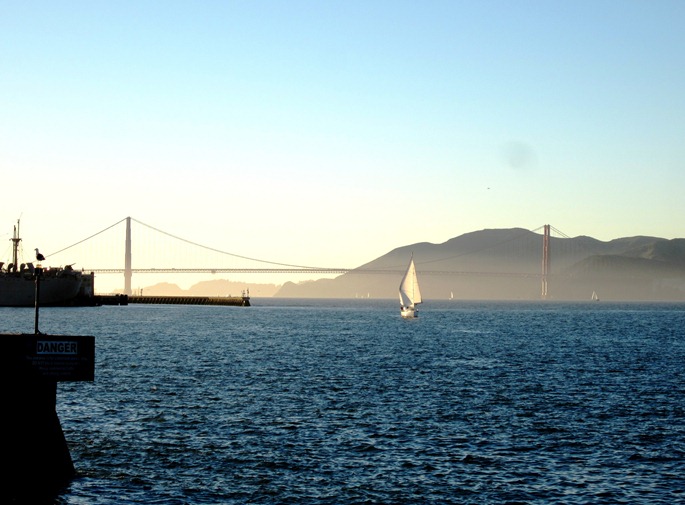 Raspberry Caffe Mocha @ Starbucks
This is a customized drink, not on the Starbucks menu. My friend, K, from work told me about the Iced Raspberry Mocha that she always orders, and it was so good. Since it’s been chilly, I ordered the hot version of the same beverage – Raspberry Caffe Mocha with skim milk and a little whipped. Outstandingly DELISH! If you love berries and chocolate, you will LOVE this drink. I can’t wait to mix and match other concoctions at Starbucks! They’ve got me hooked this season. ~ $4 for a Tall @ Starbucks 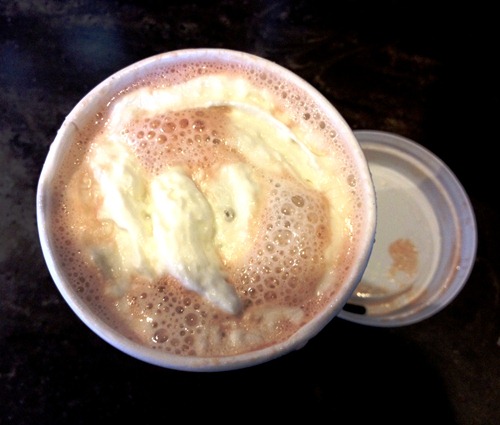 Backyard
I’m in love with my sister’s backyard.  The combination of California sunshine, perfectly cool weather, and the array of fall colors are so inviting that I usually end up sitting on the swing… with a cup of tea, and other times just texting, and other times just taking a nap.  It’s just so peaceful, cozy, and homey here.  ~ priceless 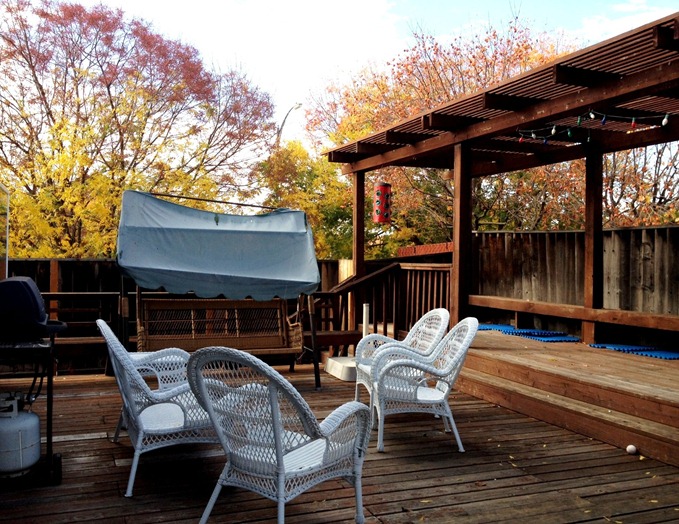 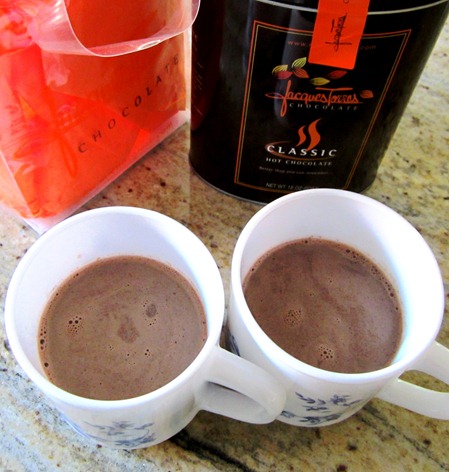 Jab Tak Hai Jaan
Jab Tak Hai Jaan translates to as long as I live or until my last breath.  Yash Chopra’s final movie was mostly filmed in London and released a couple weeks ago, I made sure I saw it in the theater opening weekend.  Personally, I loved the movie… same old Indian movie concept… boy meets girl, falls in love with her, romantic songs follow, there is drama, and then the plot thickens.  On the other hand, the songs didn’t quite live up to the same “Yash Chopra” expectation one would expect of Yash Chopra films with the exception of this lovely Poem.  And now, cast!  Anushka Sharma did a fantastic job in this movie… she comes across as effortlessly natural on screen.  Katrina Kaif looked flawlessly angelic on screen, however she had the same expression on her face in the entire movie, her acting’s a bit weak, but boy can she DANCE!  Unsurprisingly though, Shahrukh Khan not only looked amazing in a beard, his acting was brilliant as always, and he is reason enough to go see Jab Tak Hai Jaan in the theater.  Highly recommended!  ~ $12 – what’s up with movie ticket prices being so high lately?

Pecan Pie @ The Magnolia Bakery
On his way home one evening, my husband picked up Pecan Pie for me from Magnolia, and I was in heaven.  The combination of the pecans and corn syrup was beyond delicious, of course, the buttery crust helped too.  Before the holidays are up, I strongly suggest heading to Magnolia and getting yourself a slice of Pecan Pie.  In addition, I’ve heard the Apple Pie at Magnolia is quite amazing, but I haven’t tried it yet so can’t really comment.  ~ $5 a slice @ Magnolia Bakery, Rockefeller Center, New York City 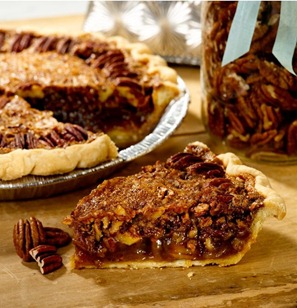 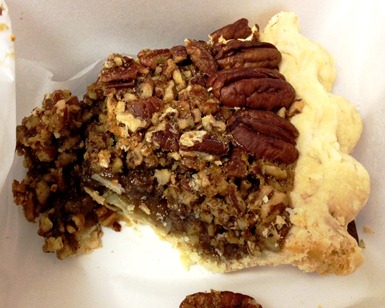 Chocolate better than Sex
At Chocolate Dreams, Pier 39 in Fisherman’s Wharf, I found this list mounted on a wall and I just had to take a picture and share with y’all.  ~ hilarious! 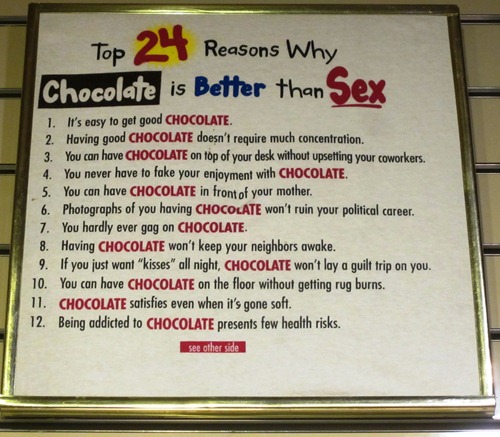 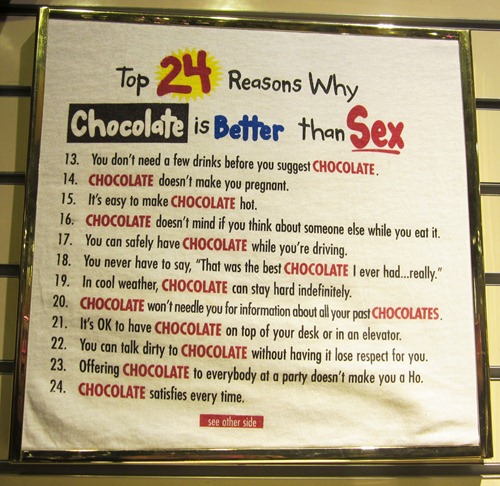 TELL ME: Share some of your favorites from this past week!

Little “honey bee” got a new hive, and Honey w