Did you know Whole Foods allows you to sample cheeses?  Yup, I didn’t know that either. 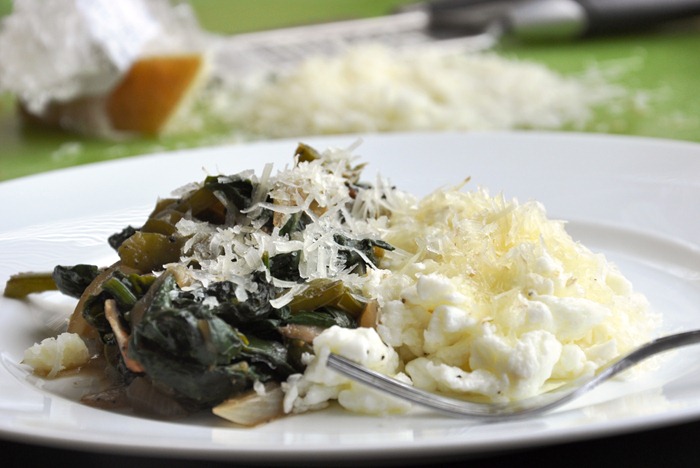 On a recent visit to Whole Foods, I dubiously asked the guy behind the cheese station if I could sample a cheese, and he surprisingly said YES. 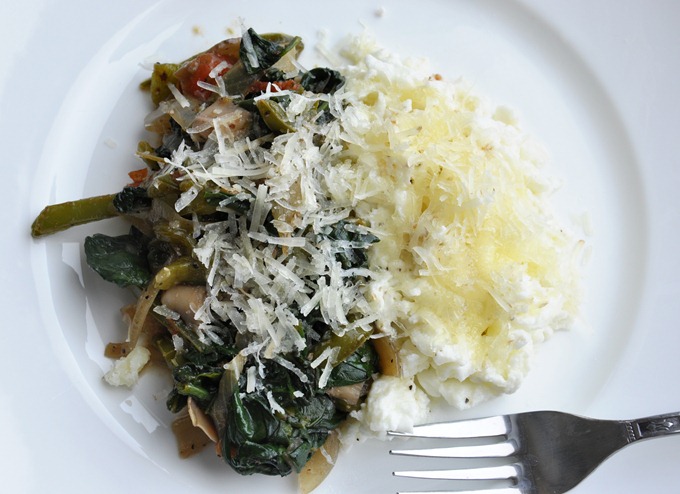 After recently purchasing Fontina cheese and not being able to handle the pungent taste, I didn’t want to buy yet another cheese and toss it away. 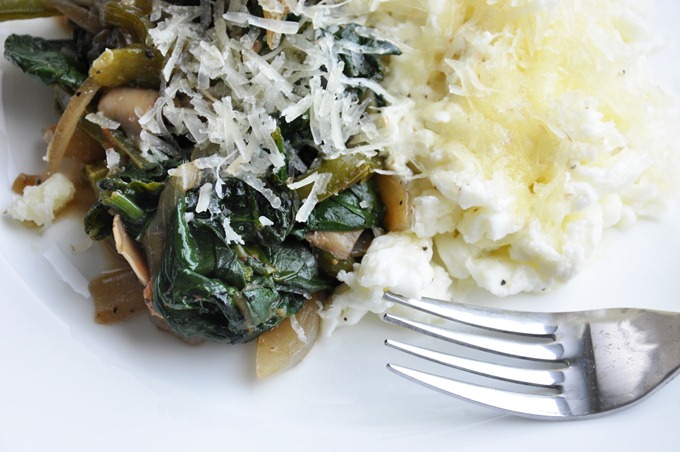 Even though I ate a lot of Manchego cheese when I visited Spain and Mexico in the past, I never really tried Manchego on its own to know for sure whether I’d like the flavor or not. 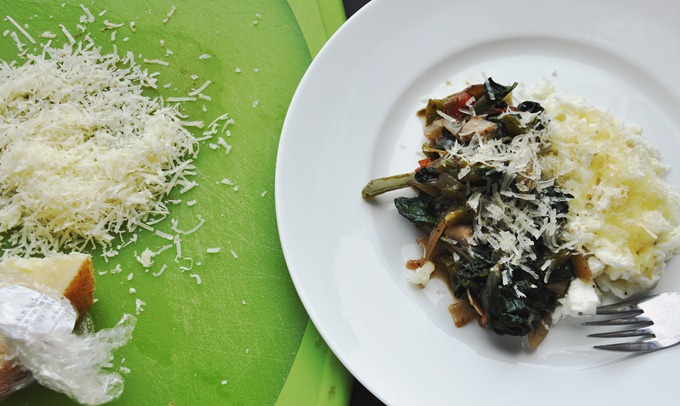 First impressions… it was slightly salty, very buttery, and had a hard texture.  Manchego cheese is a Spanish cheese made from sheep’s milk, I absolutely loved it, and it now tops one of my favorite cheeses. 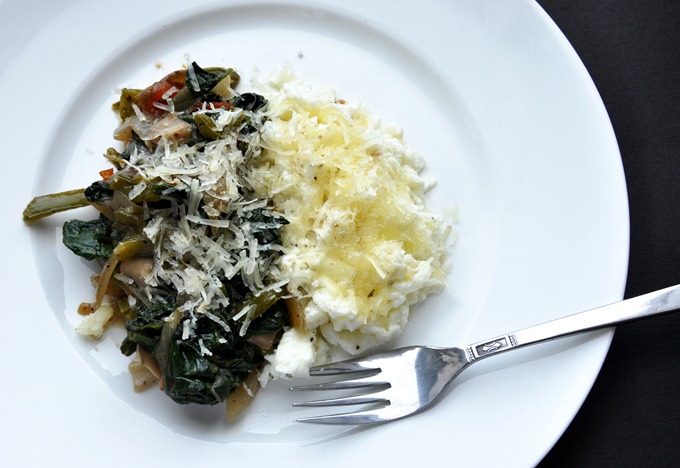 This delicious breakfast was inspired by the Egg White Omelet I recently ate at the Imprevist Restaurant in Mexico.  It was the best omelet I ever ate in my life, and so I had to recreate it.  Here is a photo of the original omelet. 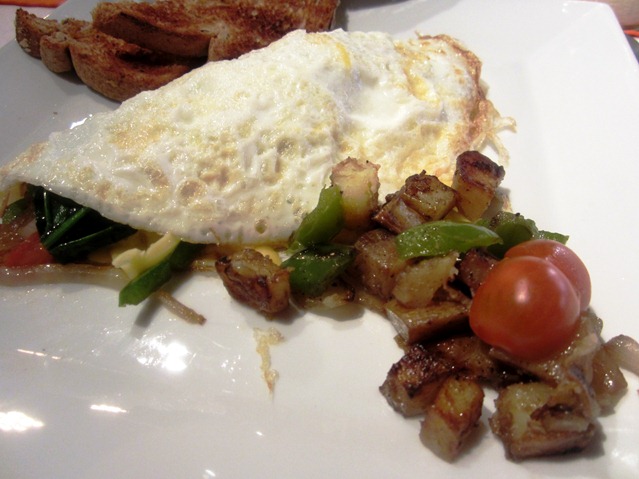 Truth be told, I wasn’t able to replicate the grilled veggies exactly, I’m probably missing an important Mexican spice, nonetheless the buttery flavor of the Manchego Cheese seals the deal. 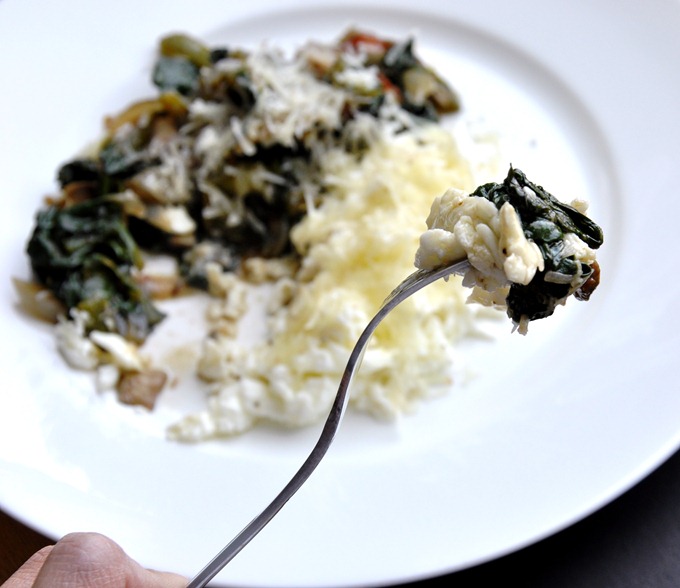 This breakfast consists of lots of protein, fiber, vitamins, some fat, but NO CARBS, looks like the perfect way to start the day.  I was full for 6 whole hours!  Enjoy! 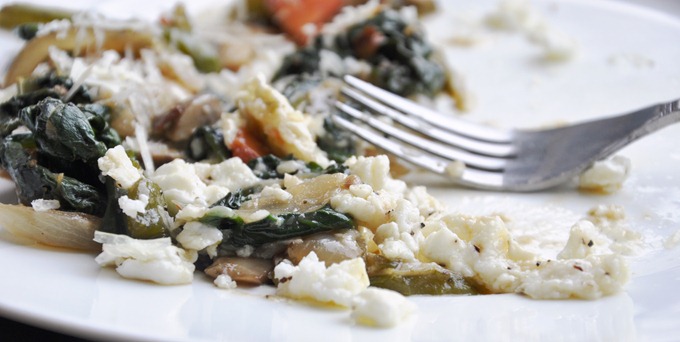 NUTRITION: Egg Whites are high in protein, low in calories, and contain minimal fat making it ideal for those trying to lose weight.  Manchego cheese is high in protein and consists of a great amount of Calcium and Vitamin A, however there is a lot of saturated fat in this particular kind of cheese.  Spinach is loaded with tons of nutrients. It is rich in Vitamins A, C, and K, and is an excellent source of Iron and Folic Acid. Spinach also contains small amounts of Omega 3 fatty acids.  Mushrooms are a very good source of Vitamin B6 and Protein.  Bell Peppers are a great source of Vitamins A, B6, and C.  Tomatoes are a good source of Vitamin A and C.

for the scrambled egg whites (serves 1):


DIRECTIONS:
1. Here are the main ingredients. 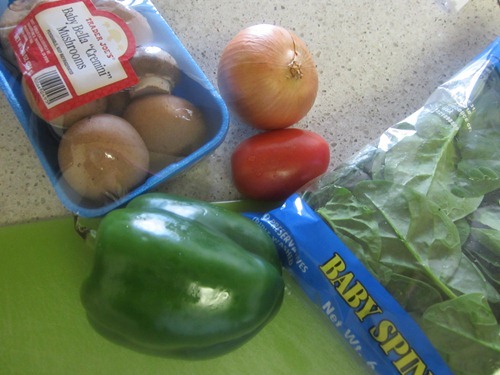 2. Begin by slicing the onions and ½ a green pepper. 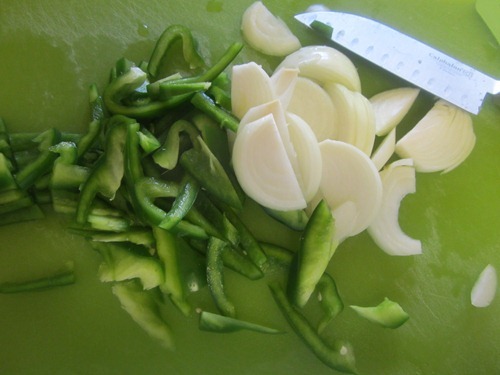 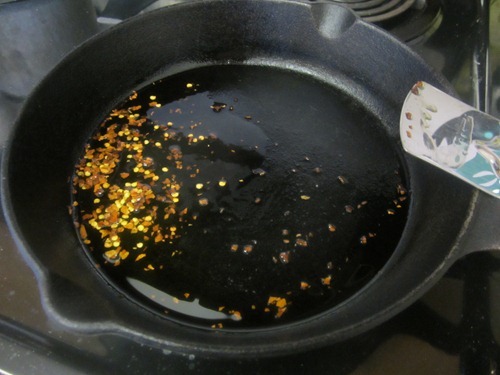 4. Once the pepper flakes sizzle, add the onions and green pepper.  Season with salt.  Sauté for about 5 minutes or until soft. 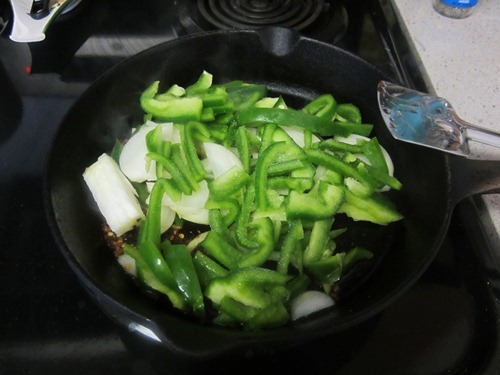 5. In the meantime slice the mushrooms.  Once done, add the mushrooms to the onion/green pepper mixture and season with salt.  Cook for about 5 minutes until the mushrooms are soft. 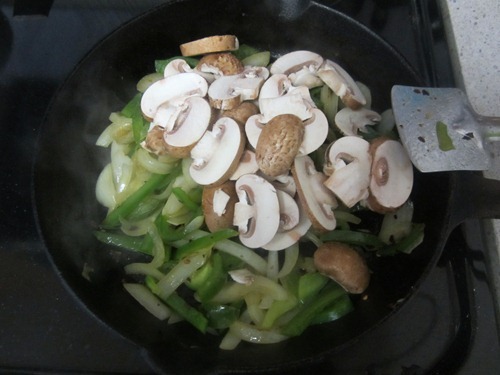 6. In the meantime chop a tomato and wash the spinach leaves. 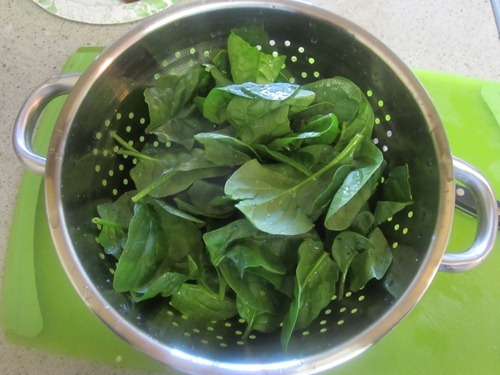 7. Once the veggies are cooked, season with black pepper and garlic powder. 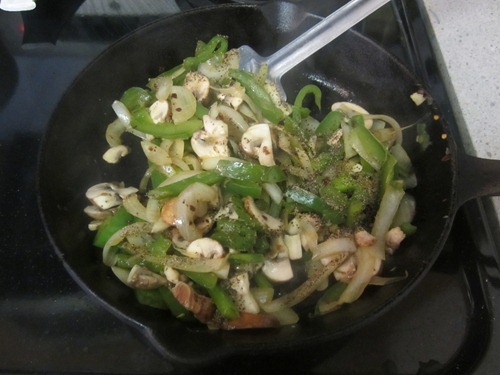 8. Add the spinach and tomato.  The spinach will wilt down in a few minutes, however allow the spinach to cook since it will release a lot of water.  About 5-7 minutes. 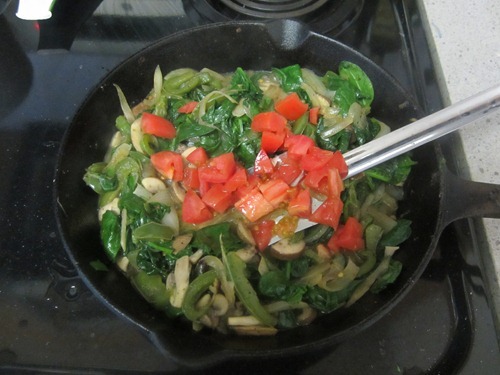 9. In the meantime, grate the Manchego cheese. 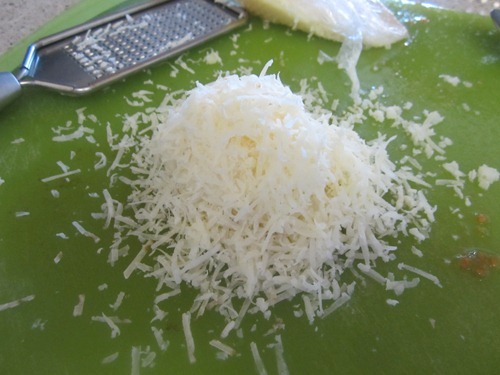 10. The water should all be absorbed as follows, at this point turn off the stove. 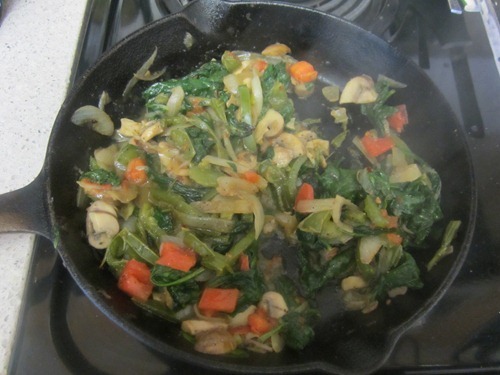 11. Beat the egg white and season with salt. 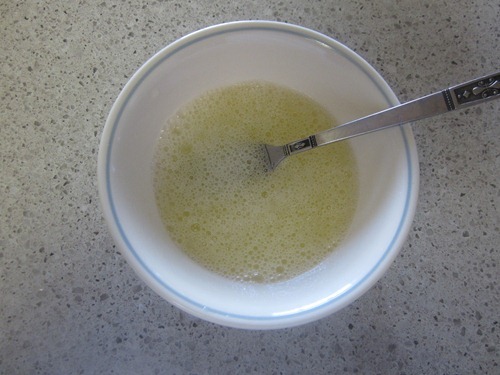 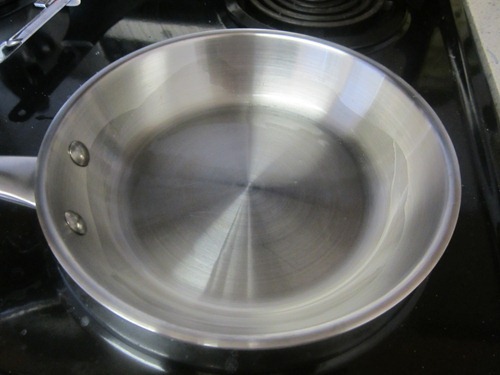 13. Pour the egg whites and see if you can form an omelet. 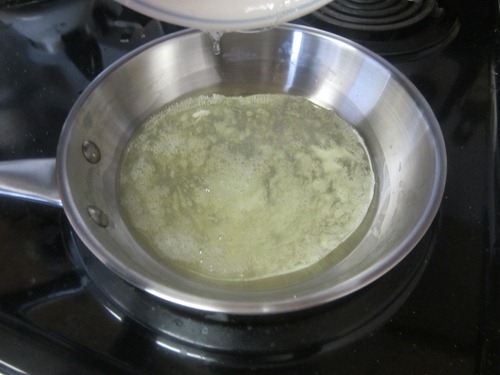 14. I wasn’t able to form an omelet with egg whites, hence I made scrambled egg whites.  Season with salt and black pepper to taste.  Cook until lightly golden.  The egg whites tend to stick when using a stainless steel pan, hence keep stirring. 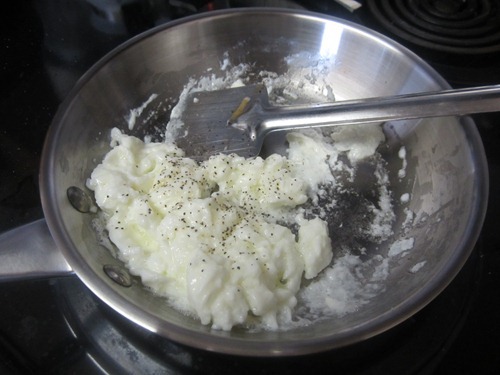 15. Plate the egg whites and top with Manchego cheese. 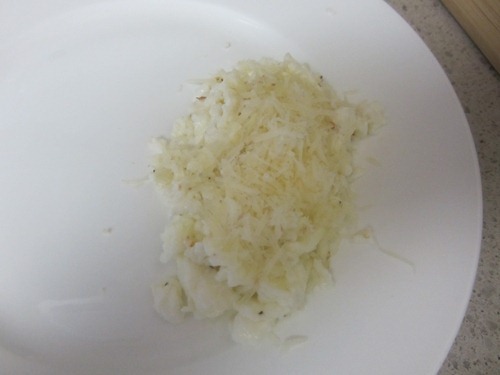 16. Add the grilled veggies on the other side and top with Manchego cheese.  Buttery deliciousness!!! 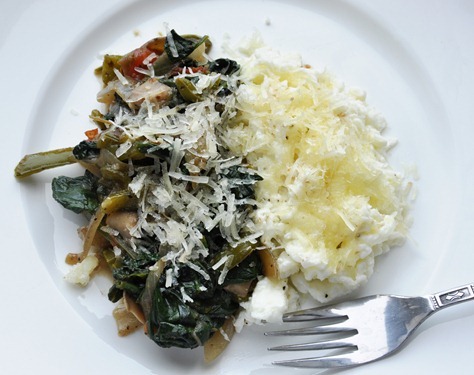 TELL ME: Have you tried Manchego Cheese?  What’s your all time favorite cheese with eggs?