A restaurant publicist reached out to me inviting me to dinner at De Santos as part of a Press Review.  Without any hesitation, I accepted. 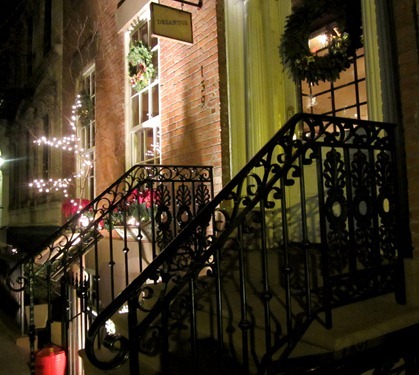 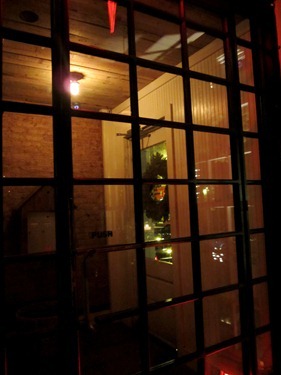 Housed in a historic brownstone that was once home to legendary New York rockers, writers, and artists such as Janis Joplin, Bob Dylan, Edward Albee, and Jean Michel Basquiat, De Santos showcases the creative dishes of Executive Chef Angel Vela, formerly at Pastis and Waverly Inn. 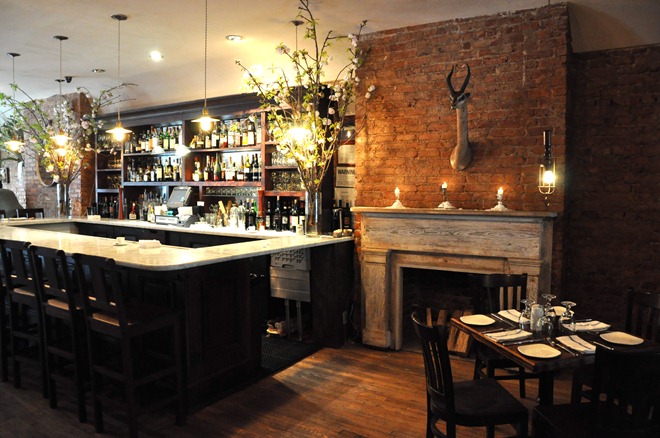 This hidden gem located in the quaint neighborhood of the West Village has so much character. 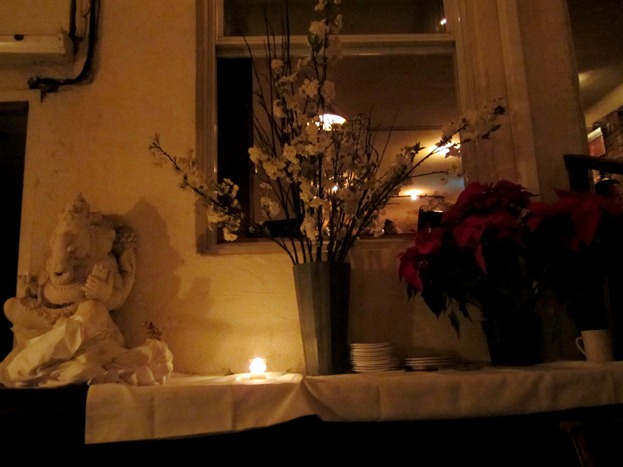 The ambience here would best be described as rustic and romantic.  As I walked in, it almost felt as though I was walking into someone’s home.  The soft candle lighting illuminated the entire space giving the restaurant a romantic glow. 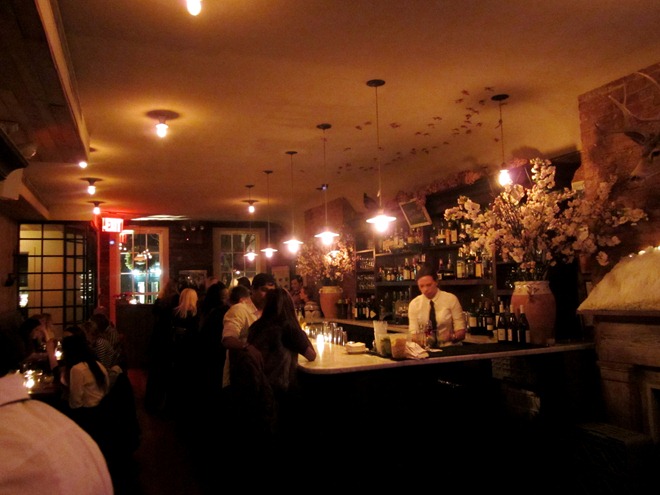 We were seated towards the back of the restaurant where the doors open into a seasonal picturesque garden for al fresco dining. 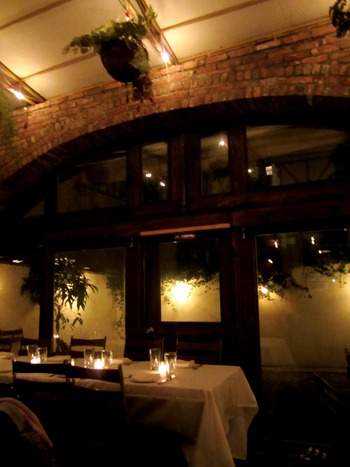 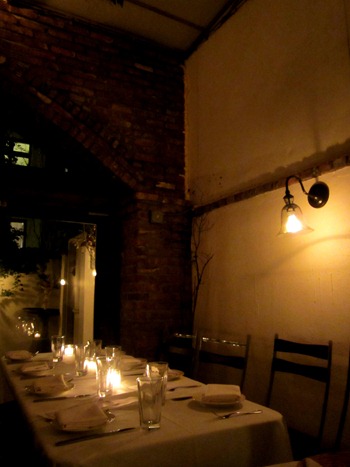 Here is what the garden patio looks like during the warmer months. 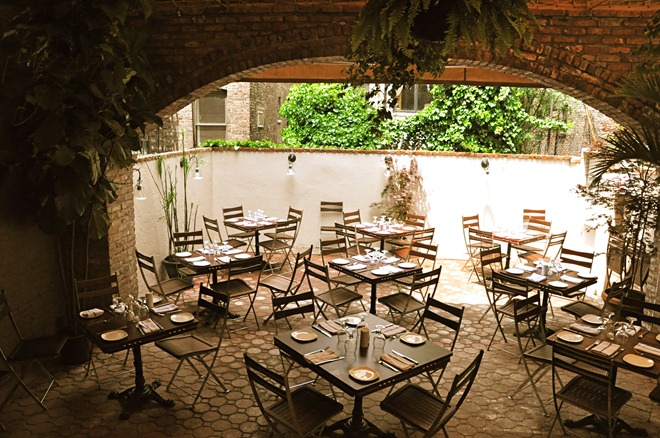 
MY REVIEW
(due to less lighting and avoiding flash, my pictures are on the dim side… sorry)I started off with a glass of Cabernet, a medium bodied wine with fruity tones. 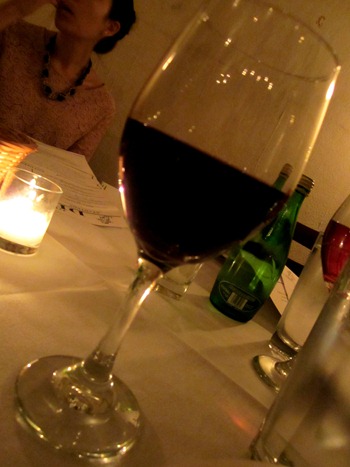 Shortly after, a spread of appetizers were brought out, and although I don’t eat “land” animals, I wanted to be open-minded and at the very least try a little bit of everything.  We started off with the Beef Carpaccio Potato Gnocchi and Truffle Cream…the beef was just okay for me since I don’t eat beef, however I really liked the potato gnocchi which was rich and creamy. 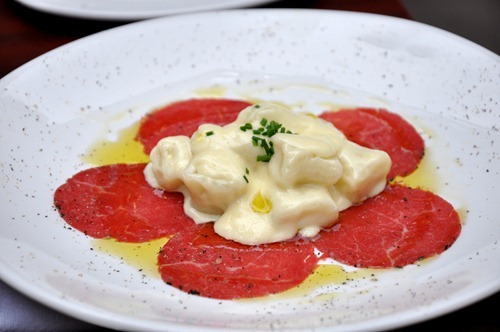 Next were the Duck Tacos, and although I don’t eat duck, these tacos were flavorsome.  In general, duck is more chewy than chicken from what I understand. 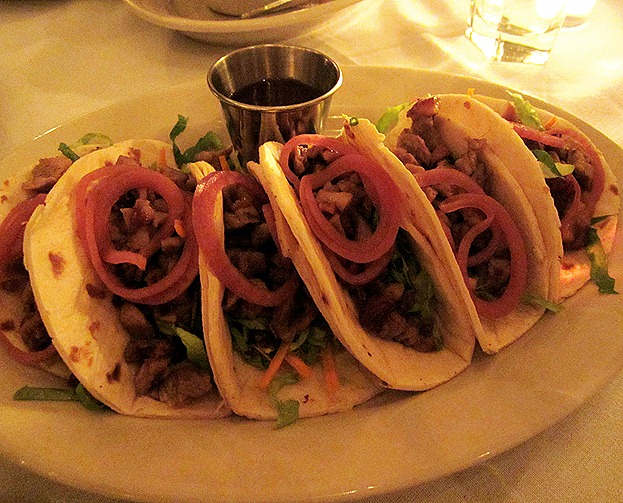 We also had a tasting of the incredible Truffle Macaroni & Cheese which I have already mentioned was one of the Best foods I ate in 2012.  The mac and cheese wasn’t overly creamy, however the herbed breadcrumbs on top added crunch and so much depth to the dish.  Scrumptious!

As my entree, I unsurprisingly opted for the Pan Roasted Salmon with Creamy Dill Sauce and Greek Salad.  The salmon served over a bed of lettuce was simple and cooked to perfection, however the dish was a tad bit salty for my liking.  The Greek Salad with tomatoes and kalamata olives was wonderfully flavored with a creamy dill sauce. 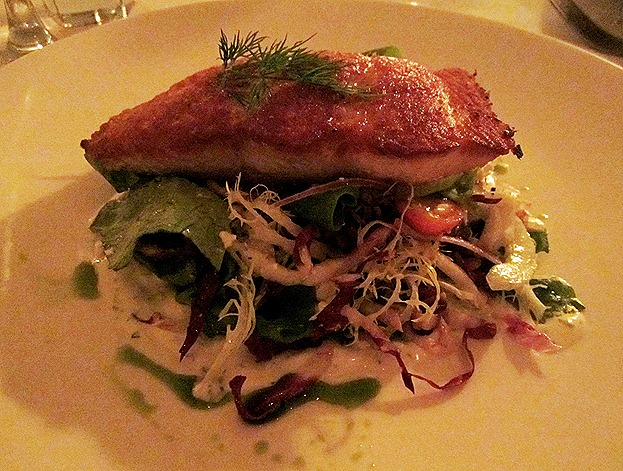 My “new” friend ordered the Special of the Day – Grilled Sea Bass with Mushrooms and it was outstanding.  It was my first time trying sea bass, and personally I thought it tasted even better than my salmon. 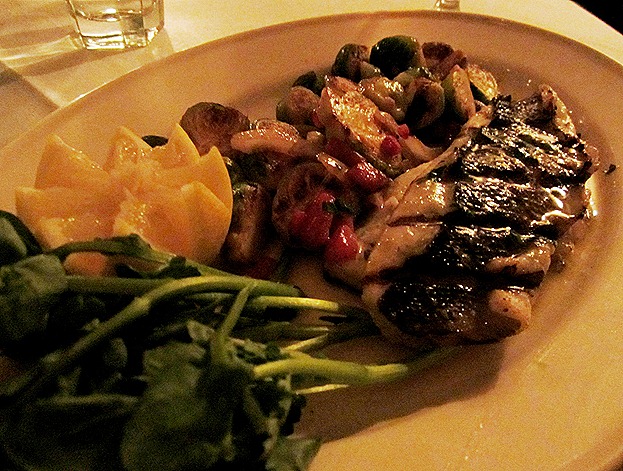 Another entree that stood out were the Seared Scallops with Wild Mushroom Risotto.  Although I didn’t try this dish, one of the reviewer’s mentioned the scallops were perfection. 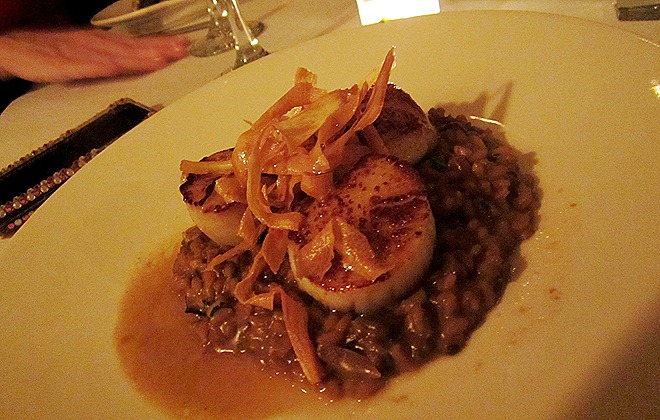 And last but not least, dessert time!  We started with the Chocolate Lava Cake which happens to be one of my favorite desserts, however the dark chocolate was on the bitter side and the hot lava was not exactly oozing out of this cake as expected.  The Molten Lava Cake was good, but I’ve tasted better. 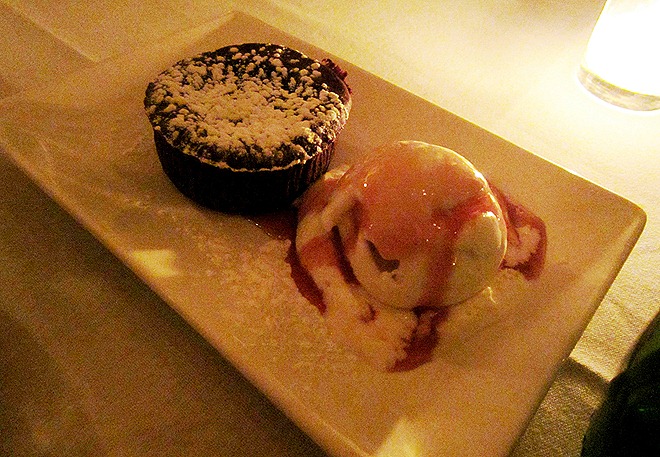 Next were the Crepes filled with chocolate and paired with Dulce de Leche and Toasted Almond Ice Cream.  The crepes were light, tasty, and not too sweet.  Simple, elegant, and delicious. 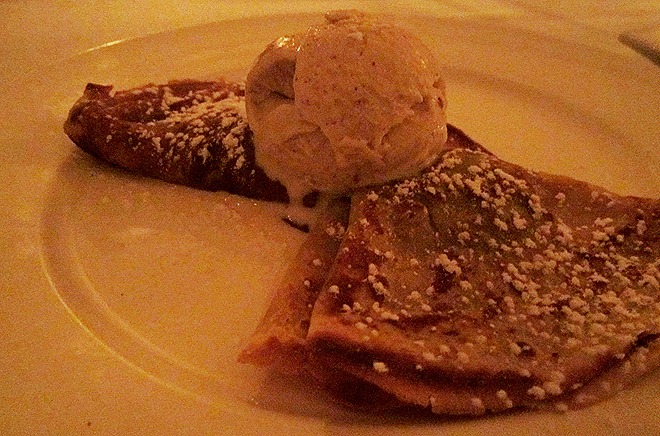 And you know me, can’t have dessert without tea/coffee, and so I finished off my meal with a cup of hot coffee that was medium bodied and very well made. 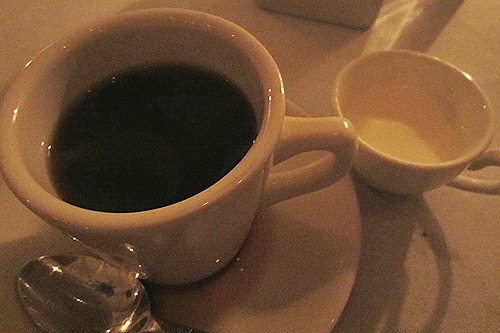 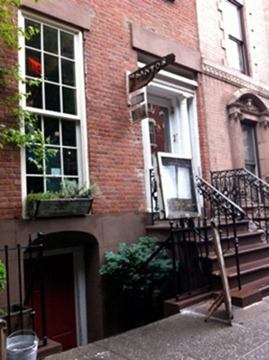 De Santos is a charming and cozy restaurant nestled in the West Village.  I look forward to dining here again, especially during brunch for their 2 hour unlimited cocktails.  In terms of food, the Truffle Macaroni and Cheese and Sea Bass were standouts, not to mention the Seared Scallops which was quite popular with another reviewer.

The service here is very good.  The waiters were cordial and accommodating as they came around and took our orders on their iPad, very very cool.  The vibe at this seemingly romantic restaurant changed after 8 pm to a space that was vibrant and full of energy.

Overall a fabulous meal and good service, I will definitely be back for brunch.


TELL ME: Have you been to De Santos?  What are your thoughts on this charming restaurant?

Ready for some Indian Afternoon Tea recipes this M

I’m not even gonna try to compare my delicious s

It takes a village to raise a child, and for some

When keema meets a taco! Keema is generally enjoye

💛 Golden Hour 💛 Got all dressed up for a spe